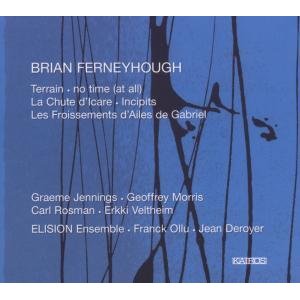 Irvine Arditti is human! The proof is right here on the first track Terrian. It is one of the many pieces written by new complexity composers for Arditti, at his urging but also presumably under the assumption that no mere mortal would ever be able to play it, or even have the guts to try. But no, here is a performance from somebody else, the violinist Graeme Jennings, that does the music full justice. It is lively, precise and focussed, a harbinger perhaps for a new generation of Ferneyhough performers who are both willing and able to take up the challenges.
In the following tracks, the prospects become even more promising. Every work here is for a contertante instrument with small ensemble, and the playing from both the youngish soloists and the youngish chamber orchestra is incredible throughout. Performing Ferneyhough involves reconciling a paradox. He is a composer who has repeatedly stated that his music should be precisely executed rather than interpreted. Yet this music is full of life and energy, and as much of it comes from the performers as from the scores, so to express the impulsive energy of this music, while always remaining faithful to the detail is quite an achievement.
Timbre provides continual variety on the disc, both in terms of the choice of solo instruments and the makeup of the ensemble. The solo instruments are violin, guitar duet, viola and finally solo guitar, while the instruments of the ensemble include bass flute, Eb clarinet, soprano trombone and bass trumpet. None of this eases the practicality of performance of course, but it does allow the composer a sophisticated palette from which to divine his subtle textures. You won't find much lyricism here, and most of the sounds are of the dull or mildly abrasive variety. That doesn't make it sound very attractive, but the subtle gradation of timbre between the instruments makes for endlessly fascinating sounds. The solo clarinet in La Chute d'Icare is cast against type to a certain extent, so used are we to hearing the clarinet as a lyrical voice. But the choice of instrument, here and throughout the disc, is ideal.
no time (at all) is for two guitars tuned a quartertone apart. The effect is reminiscent of the early microtonalists, particularly Haba and Wyschnegradsky, for whom the quartertone piano was the instrument of choice, a sound which the plucked strings of the guitars seem almost consciously to imitate. Ferneyhough has written a number of works for guitar in recent years, and although I don't know his motivations, it is an instrument that suits his music. The classical guitarist is, after all, a performer who is habitually addressing musical complexities with a minimum of means. The composer seems to have embraced this onstage conflict between the performer and the dots, and to have upped the ante with thrilling results.


Anybody who was unfortunate enough to have sat through Ferneyhough's disastrous 'opera' Shadowtime a few years ago may be relieved to hear that the composer has salvaged something from the wreckage. The opera's main problems were dramatic rather than musical, specifically that there isn't any drama, just a few singers walking on in front of the orchestra occasionally to deliver a soliloquy. The most frustrating thing was that the story Ferneyhough had chosen, about the death of Walther Benjamin, is actually very interesting and lends itself naturally to operatic treatment. Anyway, the last work on this disc, Les Froissements d'Ailes de Gabriel, is taken from Shadowtime, it is one of the extended interludes. The choice of guitar as solo instrument may be intended to evoke Spain, the country Benjamin was fleeing to at the time of his death, but Ferneyhough rarely goes in for anything that literal. The piece is very bitty, long but made up of short, only tenuously linked sections. Historical pastiche perhaps, alluding to Webern's contemporaneous scores? Again, that's not really Ferneyhough's thing. The piece is the least successful on the disc, but there is still plenty of interest here, particularly the timbres and instrumental effects. In general, though, it seems that the rambling incoherence and lack of structural focus that plagues Ferneyhough's opera is as evident in the excerpts as it is in the complete work.