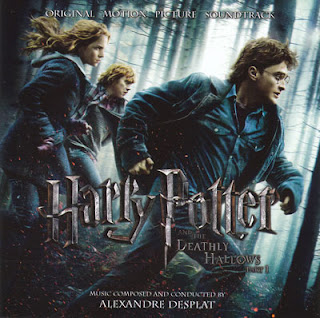 Alexandre Desplat is the fourth composer to take on the Harry Potter franchise. The first film was scored by John Williams, whose themes and motifs created a musical identity for the fantasy world. After Williams, Patrick Doyle and Nicholas Hooper each did stints, both doing their best to move away from the thematically saturated score of the original. Desplat continues in that vein; the links between his score and that of The Philosopher’s Stone are tenuous to say the least. The OST album includes just two unadulterated statements of the 'Harry Potter Theme'. The music does make subtle references to it elsewhere, but you'd be unlikely to clock them with the distractions of a film going on at the same time.
The gradual evolution of the soundtracks to the Harry Potter films reflects the narrative progression of the story. If the music is anything to go by, this will be a very dark and psychological outing. The music is impressively sophisticated, and if I didn't know, I wouldn't have guessed that it is for a children's film. But of course it is Hollywood music too, and while the atmosphere is often intense, the actual musical textures are usually quite straightforward. But the quality of the music is demonstrated by Desplat's ability to create the maximum effect from the minimum of musical material. So climaxes are often scored with heavy tremolo arpeggios in the strings (almost, but not quite minimalism), and the quieter sections make impressive use of solo flute and piano. The sound of the flute is a distinctive feature of this score, often playing quietly in the lower register and over a bed of slowly moving string chords.
It is difficult to identify any new themes that Desplat may be introducing. He is in a bit of a catch 22 joining the franchise at this late stage, in that he is obliged to move away from John Williams' themes, but doesn't really have the license to introduce any of his own. The result is music that focusses more on atmosphere than identity. Most listeners will have the advantage over me of having already seen the film, and the visual associations will probably make the experience of listening to this considerably less abstract. I don't know if the album presents the music in the order that it appears in the film, but whether it does or not, the disc seems to be front-loaded, with all the dramatic and memorable music in the first 20 minutes or so.
It is all too rare these days to hear a studio recording by the London Symphony Orchestra. Most of their appearances on CD in recent years have been on their LSO Live label, all of which are live recordings of concerts, mostly recorded in the acoustically sullen Barbican Hall. The studio situation is, of course, also acoustically inert, but there is a little more scope here to alter and focus the sound at the post-production stage. The results are richer and timbrally more complex than on most of the LSO Live recordings, showing that a little bit of jiggery pokery at the editing stage is not necessarily such a bad thing.
Of all the orchestras in the UK to hire for film music sessions, the LSO has to be one of the most expensive. So do the results justify the expenditure? Well, in my opinion they have the best string section of any London orchestra, and the strings certainly impress here. They have excellent unity of ensemble and a timbre that is both open and rich. The dark, sinister textures often rely heavily on the cellos and basses, who, as on the concert stage, really make the most of every opportunity to shine. The woodwind, brass, percussion and harp are all heard at one point or another but none of them are ever put to any particularly interesting use. Again, it is a case of maximum effect from minimum notes on the page.
So all round, not a bad Hollywood film soundtrack at all. Buyers of the disc are able to download a surround sound version of the album, which is a nice touch, and should appeal to those movie lovers whose audio system is set up specifically to watch films. In fact, as this is primarily atmosphere music, having it coming at you from all sides should add considerably to the experience.
Gavin Dixon