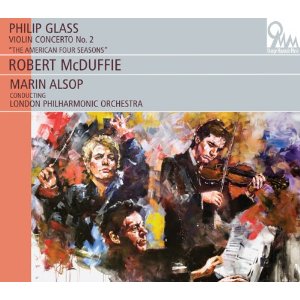 The London Philharmonic's Winter Season Programme for 2009/10 raised some high expectations with three much-anticipated new works: a symphony (the first ever) from Ravi Shankar, a 4th Symphony from Henryk Górecki and the European première of a 2nd Violin Concerto from Philip Glass. In the event, Shankar's Symphony got a warm but mild reception and was soon forgotten, Górecki was to ill to complete his symphony, and subsequently died leaving the work unfinished, and the Glass Concerto? Well, it came closest to meeting expectations. As this recording of the event demonstrates, it received a fine performance, and ended up posing more questions than it answered.
Glass' previous – now his First – Violin Concerto was written in 1987 and his since firmly established itself in the repertoire. It was written at a time when Glass was moving towards traditional genres. With the First Violin Concerto he hit the sweet spot where the popularity of his all-American tonal minimalism combined with audience-friendly Romantic rhetoric to create a work with genuine mass appeal right across the classical audience base. Glass has many detractors, but it is the one work that is most often cited as an exception by those who otherwise dislike him.
Glass might just have pulled that feat off again with his Second Violin Concerto. This time the model is Baroque rather than Romantic, and whereas the First could be described as loosely based on Mendelssohn or perhaps Brahms in terms of its structure and dramaturgy, the Second is, by the composer's own admission linked to the concertos of Vivaldi. It was commissioned as a companion piece to The Four Seasons, and like Vivaldi's masterpiece, it is structured as a long series of movements, eight in total, with the tenuous thematic connections that you might find in a baroque suite.
In fact,there are only four numbered movements, but they are interpolated by three unaccompanied 'songs' and preceded by an unaccompanied prologue. Unlike in the First Concerto, the composer projects a fairly relaxed attitude to formal structuring, and it often seems as if the music is going off at a tangent on a whim. That said, there are a lot of transitions in the music, as if he feels the stark contrasts between tempos or moods would jar. It is that feeling for continuity that distinguished this from Glass' more radical early music.
Are there references here to Glass' earlier work? His music used to rely heavily on fast, repeated arpeggio patterns, but in this work longer, more directed melodies predominate. This means that when he does launch into one of those episodes of fast arpeggios bouncing across the strings, it sounds almost like a reminiscence of earlier days. He adds an electronic keyboard to the orchestra, which could conceivably take us back the very earliest years of his career. There is also a harpsichord in there, and in one or two passages the harpsichord and electronic organ take turns playing the continuo bass line, as if Glass is in dialogue with Vivaldi.
The concerto is long and varied, and even if you don't like it all there is bound to be something here for you. Robert McDuffie's credentials as a performer of Philip Glass were firmly established in 1999 with his recording of the First Concerto (Telarc CD-80494). Of the dozens of recordings to have appeared of that work, his is surely among the very finest. On the whole, this performance is equally successful. It is a shame though, that Glass doesn't write any music here that is in the spirit of his First Concerto's second movement. McDuffie's finest moment in that work is the arching melody that seems to last for the whole movement and which he plays with a luminous intensity. But his sound is just as good in this new recording. He has one or two intonation slips in some of the high passage work, but nothing serious.
The London Philharmonic are ideal in the accompaniment, not because of any particular affinity with American music, but rather because of their ability to turn their attention to almost any music and sound like they have been playing it for years. Marin Alsop has, of course, been conducting Philip Glass for years, and her expertise was no doubt invaluable. She paces the music well and ensures that the progression of the music always sounds logical, and I suspect it might not in lesser hands.
This is the first recording I have heard that was made in London's Royal Festival Hall since it was renovated a few years ago, and the sound is excellent. Even the unaccompanied violin movements have a warm glow to them, and if that has been supplemented at post-production then the digital jiggery-pokery is more than justified by the results. 'Orange Mountain Music' is Philip Glass' own label, and given the inevitable commercial interest in this work, I suspect that he has reserved the rights to the first recording for himself, a sound decision both in artistic and financial terms. This will probably go on to become the first of a great many recordings of the concerto, but its benchmark status seems secure for a good few years yet.
Gavin Dixon