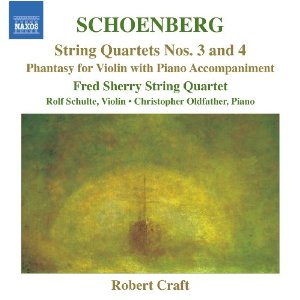 What exactly is Robert Craft's involvement in this recording? He is credited as having 'supervised' it, which is apparently enough to justify, not only its inclusion in the Naxos 'Robert Craft Collection' series, but also an advert for the conductor's recent autobiography on the back of the liner. No doubt it is an advantage to have Schoenberg's representative on earth in the control room, but it does seem that Naxos are stretching their links with Craft slightly beyond the realms of credibility.
The real star of this disc is Fred Sherry. He is almost as steeped in Schoenberg performing traditions as Craft, and the string quartets he has assembled for these performances prove to be well up to the task in hand. I say 'string quartets' because the personnel of the Fred Sherry Quartet is evidently variable, and only Sherry himself on the cello performs in the same part in both works. The other players are from a younger generation, and the most famous of them is Leila Josefowicz who plays first violin in the Fourth Quartet. It is a testament to the high standards of all the players that neither Sherry nor Josefowicz really excel, and all their colleagues perform with equal conviction, stylistic sensibility and technical proficiency.
Interpreting these works is a bit of a balancing act. Schoenberg's radicalism seems to be in eternal conflict with his veneration of tradition. So, for example, the music is serial throughout, but the forms of the movements hark back to the 18th century. Performers must reconcile the Classical, the Romantic and the Modern, and without the result sounding laboured or overly cerebral.
These performances find the ideal balance while maintaining an impressive sense of immediacy. Engagement comes in the form of dramatic tension rather than emotive excess, suggesting Expressionist rather than Romantic readings. The tempos are often just on the fast side of comfortable, creating valuable momentum, and without obscuring any of the detail.
The two works were written in 1927 and 1936 respectively, meaning that one was written in Europe and the other in America. Given the momentous shifts and changes throughout Schoenberg's life and career, both biographical and artistic, the stylistic continuity between these works is remarkable. If anything, the Fourth seems the most accomplished, and less encumbered by its traditional forms. The 'Phantasy for Violin with Piano Accompaniment' that concludes the programme is less exciting, a work that is as pedantic and unambitious as its title suggests. It is well played though, with plenty of life and sparkle, by Rolf Schulte and Christopher Oldfather.
The recorded sound is reasonable but in no way exceptional. The quiet passages (and yes, there are of them) seem a little distant while the tuttis are clear but uninvolving.
The recording is a worthy addition to the Schoenberg discography. It is yet another demonstration of the extent to which American instrumentalists dominate the performance of Schoenberg’s chamber music these days. There certainly seems to be a healthy tradition of Schoenberg performance in his adopted country, of which this is just the latest example. And perhaps Robert Craft is the conduit through which that tradition flows, but I still think they could manage just as well without him.
Gavin Dixon