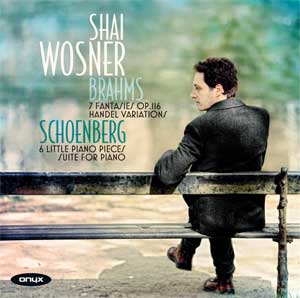 Brahms and Schoenberg have much in common, their historicism, their devotion to the Austro-German canon, their learning, the Viennese pedigree of their works... but the one thing that would seem to separate them is the noise their music makes.
Shai Wosner is evidently out to prove that contention wrong. The centrepiece of this programme is a performance of the Brahms Op.116 Fantasias interspersed with Schoenberg's Op.19 piano pieces. Does it work? Well, yes the musical coherency and intrigue of the result is undeniable. Historically the distance is less than you might think, the Brahms being very late and the Schoenberg relatively early. More importantly, perhaps, is the fact that the Schoenberg is Expressionist rather than serial, and clearly owes much to Brahms' late works. That said, you are very unlikely to confuse the two composers, the issue of tonality (however lose) the clear divider. There is also a discipline about all of Brahms' piano music that Schoenberg rarely shares. But Wosner is clearly soliciting individual opinions about the musical relationships between the two composers, so you'll have to decide for yourself at what level, if any, the musical styles meet.
This Op.116/Op.19 experiment is framed two large works, each an early but major contribution to the repertoire by the two composers. To begin, we hear the Schoenberg Op.25 Suite, and for me this is the highlight of the disc. The work is historically significant for being the first in which Schoenberg uses his serial technique consistently from beginning to end. As is so often the case with historical landmarks, it is a piece that is studied and discussed far more than it is heard. That's a real shame, because it is a great piece. It is one of those 20th century works which is obviously very difficult to play, or rather to interpret, but is also quite demure and so does not give the pianist many chances to show off his skills. It is structured as a baroque suite with each of the movements in a dance form, but paradoxically, the rhythmic identities of each of these dance genres are almost completely ignored and Schoenberg instead injects energy and propulsion into the music with his own more sophisticated rhythmic ideas. The success of Wosner's performance is largely down to his feeling for the detail of this music. He really focusses in on the relationships between successive notes and chords, which given the detail of Schoenberg's score is surely appropriate. You get the feeling that the dynamic and placing of every note has been painstakingly considered. And just as importantly, the music retains its immediacy and spontaneity, even in the face of some heavy intellectualising from both the composer and the pianist. It is a tricky balancing act to interpret this music effectively, but Wosner is clearly up to the task.
The final work on the disc is the Brahms Variations on Handel Op.24. Like the Schoenberg Op.25, this represents the composer's first significant mature contribution to the piano repertoire. Wosner takes a more laid back approach to this music, he lets the melodies sing more and doesn't worry so much about the internal balance of the textures. This more lyrical approach is surely what the music requires, but it sits uneasily with the programme's aims of comparing Brahms and Schoenberg. The Brahms Op.25, especially when played like this, is closer to Schumann or even Schubert. But if the Brahms/Schoenberg idea does work (and I'm still undecided) it is because of the Brahms' multifaceted musical persona. He was both progressive and conservative, and it is to Wosner's credit that he demonstrates both sides, both in his programming and in his playing.
The audio here is excellent. The piano is recorded in a fairly resonant acoustic, but the precision of Wosner's touch, of his articulation and of his pedalling, is such that no details are lost. Wosner has done both composers a service with this recording, but I think that in the long run Schoenberg is going to come off better for his attentions. The performance of the Op.25 Suite that opens this programme is a real revelation. The Brahms is good too, but it is the Schoenberg I’ll be returning to soonest.
Gavin Dixon