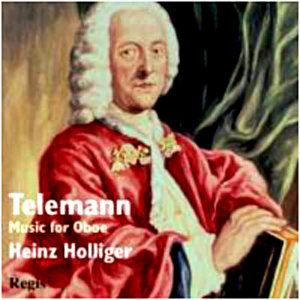 Heinz Holliger is an important advocate of the music of Telemann, but he's not averse to taking liberties now and then. The main body of this programme is 'The Twelve Fantasias', better known as the Twelve Fantasias for Solo Flute. And not only does he play them on an oboe, but it is a modern oboe using modern articulation techniques.
Consummate musicianship is his saving grace, and the sheer elegance of these recordings should endear them to all but the most trenchant of period performance fundamentalists. Yes, there is a considerable amount of vibrato, and some of the tempi are extreme, but the interpretation of each of the short works is impressively coherent, and the technical proficiency of the playing is unparalleled. Writing for the oboe, I suspect Telemann would have focussed on the lower register, but the top end holds few horrors for Holliger, whose rich tone is almost equally apparent above the stave as it is lower down.
Many of the Fantasias are divided into a number of very short movements, usually with very little thematic or tonal contrast between them. This allows Holliger to make the most of the metre and tempo contrasts without compromising the integrity of the whole. You'll often find, for example, a slow, strident introduction of only a few bars, then cutting seamlessly into a courtly dance. Telemann doesn't emphasise endings in the same way as he does beginnings, and Holliger is impressively restrained in the ornamented ralls that he adds to many of the cadences.
Ornamentation, when it comes, tends to be quite deliberate, for example slow trills with every note emphasised. But ornamentation is the exception rather than the rule, so these more emphatic gestures do not overly intrude. Likewise with the vibrato, which only really comes into play on the longer, louder notes, but when it is there you know about it, as it is wide, slow and emphatic.
The recorded sound is good, although the microphones are set a little too close and much of the fast passage work is interrupted by the sound of the keys. I don't think the recording is particularly old (the liner doesn't give a date), so I'm not sure how much the tone has changed through the process of remastering. However, there is a brightness to the tone which borders on the abrasive at times, a consequence, perhaps of overzealous cleaning.
The healthy running time of 70 minutes is made up with a Suite in G minor, in which Holliger is joined by a continuo team of bassoon and harpsichord. Again, this is Telemann in modern dress, the ensemble going for a comfortable tafelmusik atmosphere rather than for any of the austerities imposed by period performance aesthetics. It is a technically proficient ensemble, and like Holliger himself, the bassoon and harpsichord refrain from excessive ornamentation. In other circumstances, I could imagine a more equitable sound balance, but mix here really emphasises the oboe as solo instrument. And again, the limited contrast of keys and themes between the movements is balanced by clearly delineated tempos changes. A punchy, lively and elegant conclusion to a masterly Telemann programme.
This review first appeared at MusicWeb International:
http://www.musicweb-international.com/classrev/2010/Nov10/Telemann_RRC1343.htm