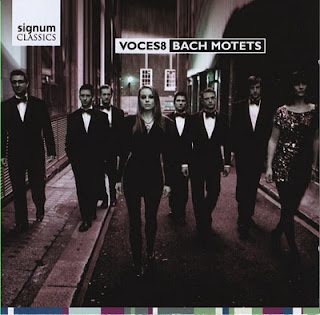 I'm not usually one to judge a disc by its cover, but this cover is very interesting. Signum are clearly hoping to appeal to new audiences with this sort of design. Hopefully the idea is to draw younger listeners into Bach's world, but it is more likely that they are aiming at the already established, and considerably more senior, crossover market. Image is clearly important here, it's not often you meet an endorsement ad for the choir's tailor on the back of the liner. And the liner itself is much more in the rock and roll tradition than the classical: it is a single sheet that unfolds to reveal a large, stylised image of the choir on the back, presumably to stick on your bedroom wall.
The performances are good but are very much what the packaging would lead you to expect. The singing is crisp and accurate, but the tempos are often fast and unyielding. The polyphonic movements are sung with a ping to the accents of each note. Its not all unaccompanied, but it is all a cappella in style. Voces8 seem to be a Swingle Singers type of group, and their Bach is designed to highlight their vocal agility and the precision of their close harmony textures.
The group is made up of former choristers from Westminster Abbey, so as you'd expect they really know the notes. They are joined by two female sopranos, who are good but are a mixed blessing. Obviously, boy trebles wouldn't fit into this kind of sexed-up Bach, but the female voices also stand out. They occasionally have some tuning problems as well, suggesting they are not quite up to the standard of their male colleagues.
The choir have instrumental accompaniment, thanks to the Senesino Players (an orchestra named after a castrato, what are they trying to tell us with that?). But the instrumentalists take a back seat, partly through Bach's refusal to write them any independent parts, but more significantly through the balance of the recording, which clearly prioritises the voices.
There are no movement divisions within the motets, and each occupies a single track. The way the motets are performed is similarly continuous, with very little pause between each of the movements. That may or may not improve the coherency of the result, but is less of an issue than the way that even individual phrases within choruses are run into each other. It is as if the producers are trying to avoid even the briefest of silences, which often robs the music of its poise.
It lacks gravitas as well, but this is probably the point where individual tastes come into play. In their pursuit of new audiences,Voces8 and Signum seem unconcerned about alienating the existing Bach constituency. That is fair enough, you can easily go elsewhere if you want to hear a more traditional reading of this music. But what this one offers is fun. The period performance movement has demonstrated how to bring life and energy back to Bach's choral textures, but none of the big names have produced anything that is quite as fun as this. Obviously, this isn't the last word when it comes to Bach's Motets, but it brings an interesting new angle to the music, and possibly a new audience too.
Gavin Dixon