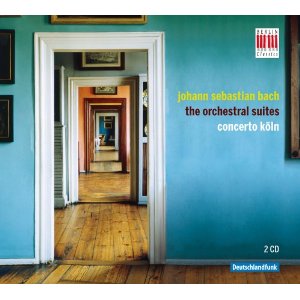 Precision is the watchword in this new recording of the Bach Orchestral Suites from Concerto Köln. The recording quality is good, the internal balance of the ensemble is finely judged, and the tempos are excellently proportioned.
The recording has been released to mark the 25th anniversary of Concerto Köln. That pedigree really shows, and it would be difficult to imagine a baroque ensemble with greater unity of artistic intent. Conducting duties are shared between three of the players, an excellent compromise for repertoire that needs a guiding hand but that can suffer from the egotistical interventions of a conductor in the 19th century sense. And while the tempos and dynamics are fairly steady, there are also a good number of subtle ralls and caesuras that no doubt require some kind of coordination from the front of the stage.
The orchestral sound is always elegant but never flamboyant. Each of the wind instruments adds a distinctive colour to the mix, but even in the tuttis there is never any suggestion that they are obliging the strings to play above their optimal dynamic in terms of timbre, and when you add trumpets into the mix that is no mean feat. The continuo takes a back seat, which may or may not be appropriate to the repertoire, but the occasional tinkling sounds of the top end of the harpsichord can have the frustrating effect of reminding the listener what they are missing in the bass. Most of the playing is characterised by very smooth articulation, which aids the phrasing, although perhaps at the expense of the textural variety.
But there is a deeper problem with this recording, one that is frustratingly difficult to pin down. Everything is so precise and measured that somehow all of the excitement gets lost. Timbre may play a part in this, like the smooth legato, the roundness of tone of almost all the instruments means that there is no edge here. I'm glad that the contrapuntal lines are not overstated, but these players often go too far the other way, taking the intricate textures for granted in the hope that they can speak for themselves. You often have to listen very hard indeed to make sense of these textures – of course you should be listening hard to any Bach you put on, but the demands made on the listener here are extreme.
Then there is the pitch. The players work to the so-called French pitch of the day a=392hz, which is very low indeed. I'm impressed that the players can maintain there exceptional intonation standards at this unusually low pitch, but I'm also concerned about the overall effect on the music. The tone colour is duller than your ear is conditioned to expect by other recordings, and the lower pitch has the effect of lowering the temperature all round. I don't quite know where the whole issue of authenticity fits into this picture, although I suspect the pitch standard in particular is the result of some speculation.
If you are tired, and many are, of Bach recordings that go out of their way to make everything exciting and new, then this more level-headed approach may be for you. And as I say, there is little, in fact there is literally nothing to fault here from a technical point of view. But it is one for serious Bach fans only, and I can't see it winning him over any new listeners.
Gavin Dixon