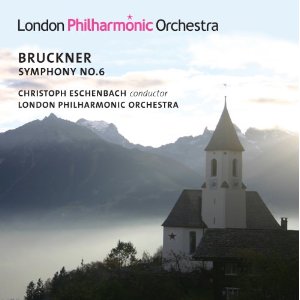 Prospective buyers can be forgiven for some trepidation when approaching this disc, Christoph Eschenbach is not widely known as a Brucknerian, and his Mahler readings can best be described as 'controversial'. He's a method man, who excels in German precession and finesse but often at the expense of the music's passion and humanity. That's fine for the modern music that he seems increasingly to be turning to, but for Bruckner?
As it happens, this is not his first Bruckner 6 on CD. There is another with the Houston Symphony that was released in 2001. And listening to this new version, it is clear that he knows the score like the back of his hand. And the results are great. The 6th is, after all, the most tightly constructed of Bruckner's symphonies. That isn't saying much but it does mean the score responds very well to Eschenbach's disciplined approach. The clarity of the orchestral textures is his overriding priority, but he is also looking for cleanly articulated phrasing. And while precision is the watchword, the music is never mechanical or lacking in grace. True, his rubato is more constrained than that of other Brucknerians, but it is there all right, and he is sure to slow down into a climax whenever the dramatic shape of the music requires it.
Another important factor in the success of Eschenbach's reading is that he never takes anything too fast. We are usually just a notch slower than the average tempo in each movement, although there some wonderfully brisk passages in the first movement that also come off really well. But steady tempos combine well with the conductor's focussed, detail-rich approach to create both intensity and scale. Some may hanker after the more emphatic climaxes that you meet in Furtwängler-era recordings, but Eschenbach demonstrates that it works just as well without. And unlike some of his predecessors, he doesn't make any excuses for the coda of the last movement. That is the one structural weakness of the symphony, and other conductors often compensate by ratcheting up the final bars into a monumental climax that the notes on the page don't quite justify. By not doing so, Eschenbach risks an anticlimax at the end, but even then it doesn't feel right to put all the blame on him.
The playing from the London Philharmonic is superb. There isn't a single section of the orchestra whose performance ever drops below the superlative. One of the greatest strengths of the LPO is its low strings, and their clarity and sheer power provide an impressive foundation for this music. The brass too are on top form, plenty of power from the trombones, punch from the trumpets and subtly from the horns. The horns have a busy time in this symphony, and there are many details of their parts, for example the question and answer interplay between the desks, that I've never heard before and that sound great here.
The sound quality too is very good. The refurbished Festival Hall is turning out to be a great recording venue, both warm and detailed in its recorded sound.
Why no SACD? Many, if not most, orchestra own labels have adopted the technology and in most cases have done their own playing more justice as a result. This recording is crying out for the full SACD treatment. Fairly cursory programme notes too. Still, this is a lower end mid-price release, so you can't ask for miracles. It's a great recording though, and worth every penny. Highly recommended.
Gavin Dixon