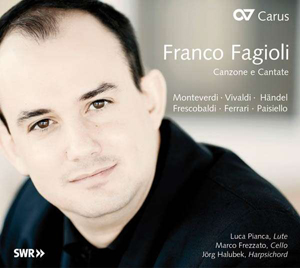 This isn't the first CD to feature the voice of Argentinian countertenor Frano Fagioli, but it is clearly intended as a career launcher. And it hits all the right buttons; after hearing it you just want to hear more of this remarkable voice. The countertenor voice is often associated with thin, nasal sounds and emotionally neutral, or at least restricted, interpretations, but there is none of that here. The repertoire may be baroque, but it is Italian baroque, and even for Italian baroque the performance style is elaborate. Fagioli and his colleagues are not afraid to ornament, nor to use a very wide dynamic range. The result is wonderfully operatic, yet there is never any feeling that the performances are at odds with the artistic sensibilities of the composers.
The timbral range of Fagioli's voice is also impressively wide. He can do the straight, focussed recitative style, but he knows that isn't very interesting so most of his singing on this disc is more florid. He has a vibrato that is very narrow but quite pronounced. I've no doubt there are a range of opinions as to how appropriate this is for 17th century repertoire, but it never feels out of place. In fact, it gives his lower register a valuable richness and his upper register a surprising power. His top notes are all there, but when he is at the top, there is always a slight sense of danger, a certain fragility of tone that keeps you on the edge of your seat. He can at times sound effeminate, but I suspect this a conscious choice, and an effect that he only uses sparingly. He often inflects the ends of phrases to the extent of endangering his intonation. But again, this is clearly a deliberate effect, and while he occasionally balances on the precipice, his tuning is never in any real danger.
The repertoire here is made up of arias and cantatas by 17th and 18th century Italian composers: Frescobaldi, Monteverdi, Vivaldi, Paisiello and Handel (an honorary Italian for these purposes). Most of it is upbeat and elegant, and even though a number of opera composers are represented, there is little here that is overtly dramatic. Accompaniment and interludes are provided by an instrumental ensemble of lute, cello and harpsichord, who provide a more varied soundscape than that limited instrumentation suggests.
The sound is good, and Fagioli has chosen wisely (if it was his choice) to record this Italian repertoire in Germany rather than Italy, given the superior audio standards further north. The recording was made in a studio, but to listen to it you could mistake it for a church. That implies some kind of digital reverb, but if any has been applied it is done very tastefully.
The packaging is stylish, although all the photos inside the liner are black and white, and the compressed page layouts make finding the English quite a project. In general though, this is another high standard release from Carus and yet another demonstration of the impressive results that can be achieved through the collaboration between a committed record label and a German broadcasting corporation, in this case SWR. If you're looking for a Christmas present for a baroque music lover who already has everything, look no further.
Gavin Dixon