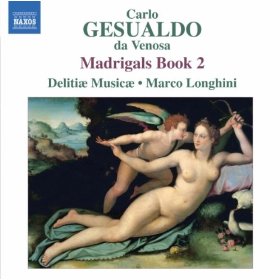 This CD marks the latest stage in a long a fruitful partnership between Delitiae Musicae and Naxos. The last ten years have seen them release the complete Madrigals of Monteverdi, and now by way of a sequel they have turned to those of Gesualdo. The approach with both composers emphasises clarity of harmony and fluidity of line. The choir is made up of men's voices, and the impressive quality of the countertenors means that the timbre at the top of the textures matches almost perfectly with that at the bottom. The clarity of the diction is impressive, and shows the great advantage of a choir made up of native Italian speakers. With all this precision and clarity, there could be a danger of sterile, lifeless performance, but the sheer energy and variety of these recordings ensures that this is never a problem. Tempos are varied, without ever resorting to extremes, and the articulation follows the varied structures of the texts. The colour of the vocal tone is also impressively varied, often reined back to almost speech-like textures. That takes discipline and control even for a soloist, let alone for a choir.
Gesualdo's first two books of madrigals were published around the same time at the end of the 16th century. We are not yet in the world of crunchy dissonances and beguiling harmonic shifts. Even so, this second book is clearly the work of a mature and distinctive composing voice. As with his later music, there is a vitality here in the rhythms that frees the harmonies to better illustrate the texts. There is a wonderful unpredictability about the harmony and the phrasing, often a phrase will seem to just run out steam and grind to a halt on some narrow spaced chord. Elsewhere phrases are elongated and interpolated to subtly change the structural balance.
Two bonus tracks at the end of the disc present Gesualdo's complete surviving instrumental music. So we have a Canzon played on a muffled sounding clavichord (with some daringly chromatic ornaments) and a 'Gagliarda' here performed by a consort of viols. They are interesting appendices, but seem curiously out of place, especially since none of the instruments had been used to accompany the madrigals (five of which have impressively sensitive harpsichord accompaniment). The presence of the instrumental works is presumably a result of Naxos' 'record everything' approach to A&R, a laudable aim, even if it does lead to some strange couplings.
The recorded sound is excellent. The individual voices are more distinct than in the earlier Monteverdi recordings, yet choral sound is equally unified. I notice they have moved to another Veronese church since their earliest Naxos recordings, and perhaps more than once. This church, Chiesa di San Pietro in Vincoli, has a warm acoustic, although this is balanced by some close micing. The packaging is impressive too, not only do we get detailed notes about the works by conductor (and edition editor) Marco Longhini, but also the latest instalment in a biography of the composer to be spread over the volumes of madrigals. Then there are the words, with elegant translations by Susannah Howe, and finally – and entirely out of keeping for Naxos – a photograph of the performers on the back of the liner. Naxos obviously think they are on to a winner with Delitiae Musicae. They are quite right, and I look forward to book 3, where things start getting seriously weird.
Gavin Dixon