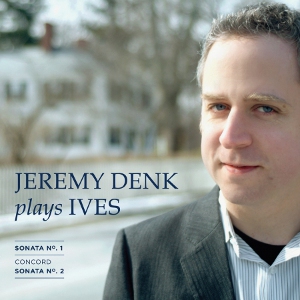 Jeremy Denk wants us to think of Ives as fun rather than dissonant. Fortunately, he doesn't consider the two mutually exclusive, and this recording of the Piano Sonatas excels in both. Whatever historical continuities there might be behind Ives' music (and I suspect they are very slight) it is important to treat him as an original, as a maverick. There is regularly a tension in Ives' music between the borrowed materials – the folk tunes, the allusions to Beethoven – and the context. I think one of the reasons why Denk's interpretations are so successful is that he accentuates that tension. Even when the composer is stating his apparently uncontroversial melodic ideas, there is always something slightly crazed about the way they are played.
Denk provides copious liner notes, which are well-written and informative – Essays After a Sonata if you like. One interesting point he makes is that Ives was distancing himself from the European traditions that were dominant in America at the start of the 20th century. That opens up some intriguing possibilities in terms of performance. Is Denk fostering an un-European piano technique. Well, he is certainly unafraid of offending traditional European tastes. The sheer quantity of pedal in these performances could seem brash and extreme in anything from the European 19th century repertoire. And the almost sensationalist way in which Ives' dissonances are presented, or rather hammered home, seems somehow distinctively American. There is also an urgency about this music, which is distinctively Ives rather distinctively American perhaps, but it comes through in the way that build-ups are affected through accelerating the music while piling on the chords. The processes almost seem external to the music, but achieve their aim through the performer acting on every performance indication, and achieving that loyalty without every risking pedantry.
That's not to suggest that there is no subtlety here. True, this music makes its greatest impact in its louder sections, but there is also an impressive gradation of dynamics and of articulation, although thick legato textures are the norm. It is easy to overlook the many quieter dissonances in these scores, but they allow Denk's technique to shine through in the evenness of balance and control of tone he achieves.
The recorded sound is good, although perhaps a little resonant given the amount of pedalling. The piano has a round rather than a crisp tone, which if anything takes the edge of the most grating of the dissonances. The belated entry of the flute (marvellously played by Tara Helen O'Connor) at the end of the Concord Sonata, is presented with the ideal balance, the piano predominating throughout and the flute apparent, but always distant.
These Sonatas don't get the exposure they deserve, not on this side of the pond anyway, so Jeremy Denk's fine recording is welcome indeed. Both composer and performer are aware that the music needs some explaining, and the excellent liner notes here are almost as useful as the recording itself in getting to grips with the music. But it is the performance that really endears this disc. It isn't easy music, but as Denk demonstrates it is staggeringly original and, much more importantly, it's a lot of fun too.
Gavin Dixon