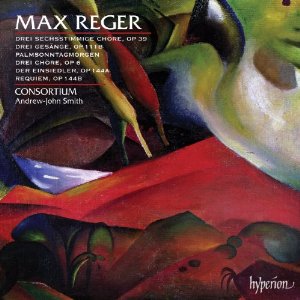 A wonderful disc this, and a testament to yet another undervalued dimension of the artistry of Max Reger. Very few of the common complaints about Reger's music apply here, the music is consistently inspired, often light, elegant and wholly free from the stodginess that blights so many of his organ works. The broad theme of the compilation is secular choral music, but all that really means is that none of the music is specifically liturgical. Religious themes certainly make themselves felt, and the music moves between states of devotion, veneration and praise. A few of the poems that Reger sets are genuinely secular, those of Nikolas Lenau for example, and Gustav Falke, but a strong devotional undercurrent flows even though these works. It is a religious feeling borne out of a complete absence of irony, and for a composer working in the age of Mahler and Richard Strauss, the self-imposed seriousness of this aesthetic almost seems to have been transplanted from an earlier age. But while he is always serious, he is never dour.
Stylistically, the most important predecessor to this music is Brahms, and you could be forgiven for occasionally mistaking individual passages here with some of Brahms' early choral works. But then you'll meet an unusual harmonic shift or a flowery piano interpolation that clearly belongs to a later time. Generally though, Reger's approach to choral writing is to use simple harmonies and homophonic textures, but to regularly jump between only distantly related harmonies, often several times within the span of a single phrase. The only exception to Reger's stylistic conventions is the 'Drei Gesänge' Op.111b for unaccompanied women's voices. Here the musical textures are even more simple, and the soundworld tends towards the medieval. This level of musical simplicity really brings out the best in Reger, he wasn't much of a melodist, yet there is a lyricism to much of his music that can really carry these simple, straightforward textures.
Reger died young and the last year or two of his life were extraordinarily prolific. There seem to be many, many works – orchestral, piano, chamber, organ – that are habitually described as amongst his very last. The two major choral works that frame this programme, 'Der Einsiedler' and 'Requiem' apparently qualify too. Together they make up his Op.144 out of a total of 147, suggesting they are indeed very late. The music of both works is almost mystical in its use of widely spaced chords, unusual harmonic shifts and dreamy arpeggios in the accompaniment. The most interesting of the two is 'Requiem', a kind of abbreviated response to Brahms' 'German Requiem', with many stylistic links. Reger's Requiem is a term with complex textual issues. He began a setting of the Requiem mass in his younger years, but it remains incomplete, the fragments having the misleading opus number 145a. The Requiem that appears here is not a liturgical setting but rather a setting of a poem with the same name by Christian Friedrich Hubbel. To complicate matters further, this Requiem (and 'Der Einsiedler' too) were written for choir with orchestral accompaniment, but Reger's version with piano accompaniment predominates these days, to the extent that the work is played at all.
The performances are all good. The choir 'Consonrtium' doesn't have a very inspiring name, but is an impressive ensemble. This is only their second disc, their first being an album of Brahms songs, to which this should provide the ideal compliment. The sound of the sopranos at the very top is sometimes a little abrasive, although I'm more inclined to blame the composer for his repeated use of the upper register than the singers for the occasional brittleness of texture. The choir is small, which aids the articulation and tuning, but sometimes makes for underpowered climaxes. Given that the Op.144 works were written with a full symphony orchestra in mind, the composer's intention must surely have been for a choir at least twice this size. But the music is flexible and retains its symphonic grandeur even in this more intimate environment. Not that it is all psuedo-symphonic, the other works on the disc, especially the 'Drei Gesänge' demonstrate the directness and simplicity that characterises much of Reger's music. It is a surprisingly varied programme, and an impressively performed disc. Any fans of Brahms' choral music would be well advised to take a chance on it.
Gavin Dixon