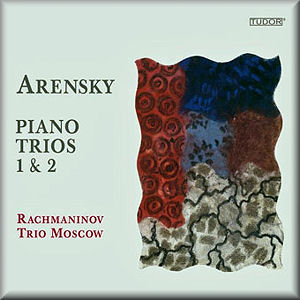 Arensky's First Piano Trio is among his most famous works, while his Second is all but unknown. Listening to the works back to back on this disc, it is difficult to account for the disparity. Both tick all the right boxes for a popular chamber work, they are melodic, dramatic, well structured. They are not masterpieces by any means, but I can't help the feeling that the Second Trio deserves at least some of the attention that the First has attracted over the years.
Anton Arensky, much like Sergei Taneyev, is a composer who suffers disproportionately though comparison to Tchaikovsky. True, both Arensky and Taneyev actively sought to emulate, or at least continue, Tchaikovsky's musical project. So often in these sorts of popularity contests it simply comes down to who can write the best tunes, and by that measure Tchaikovsky wins hands down, with Arensky and Taneyev tying for a very distant second place.
Tchaikovsky was a Classical composer in a Romantic age, and both Arensky and Taneyev inherited his classical outlook. Arensky in particular was a composer who depended heavily on traditional formal designs (with rigorous repetitions) and a sense of scale that belonged firmly in the 18th century. The positive side of this classical outlook is an emphasis on craftsmanship, and the sense of symmetry and balance in these works is one of their greatest assets.
Tchaikovsky's influence could also be framed as a dialogue between the cosmopolitan and the nationalist traditions in late 19th century Russian music. But while Tchaikovsky manages to embrace both, Arensky is much more of the cosmopolitan school, always looking westward for his models. Dance movements here are courtly affairs rather than folk episodes, and the music's Russian flavour, while often apparent, is very difficult to pin down.
These Russian performers are keenly aware of the music's Russian but non-nationalist character. Their performing style is Russian to the extent that the music plays out in broad, bold strokes. On the other hand, there is always a classical sense of restraint here too, which gives impressive clarity to Arensky's formal plans. The string players both have quite a woody tone, which is satisfyingly visceral, although it can sometimes impede the cantabile quality of the melodies.
One aspect of the performers' restraint that puzzles me is the almost complete absence of dynamics or accents. Arensky was prescriptive to a fault on both issues, filling his scores with dynamic markings, hairpins and various accents. That can often be seen as a license to ignore some of the more obvious markings, but these players seem to ignore them all. That said, the phrasing is excellent, and is elegantly articulated through some very subtle rubato. On the whole, the Rachmaninov Trio Moscow do Arensky justice by creating passionate and energetic performances of his works while always working within his self-imposed aesthetic constraints.
The sound quality is good, although not quite up to the standards set recently by some of Tudor's SACDs. The sound treats the three players as equals, and perhaps that is the way the musicians themselves work, but whichever way, it means that the piano rarely dominates and is often relegated to an accompanying role. The sound is surprisingly homogeneous for a piano trio recording, yet it never lacks clarity. All round, this is a good introduction to the music of Anton Arensky. It isn't the only way to play this music, not by any means, but the interpretations are coherent and engaging, and repay repeated listening.
Gavin Dixon