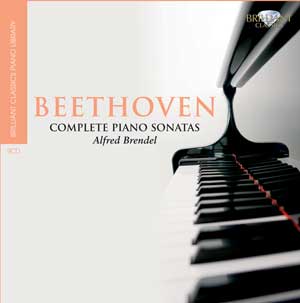 Poor old Alfred Brendel. When he retired from the concert stage in 2007, one of the long-postponed projects he turned his attentions to was the promotion of his more recent recordings, in the hope that his legacy would not be judged purely on the basis of his earlier discs. And if ever he had control of the rights to his earliest recordings (which is highly doubtful), they are now well and truly under the control of record execs, whose only apparent interest is to wring every last possible penny of profit from them.
So, here we have yet another re-issue of Brendel's 1960s Turnabout/Vox Beethoven Sonata cycle, this one in truly gruesome generic packaging. Looking on the bright side though, this presumably means it is being sold for next to nothing, and while the pianist undoubtedly achieved far greater things with his second and third Beethoven Sonata cycles, there is still some great playing here. So if you can see past the lobster-hued packaging, or rather if you can bring yourself to allow it in the house, this set is surely a bargain.
Brendel certainly evolved as an artist over the course of his long career, yet there are aspects of his playing that were as apparent in 1962 as they were in 2007. His focus on the detail of the music is already very much apparent. So, just as in his later years he was able to both represent every detail of Beethoven's notated articulations and dynamics, but more importantly to fit them into coherent interpretations and show why each of them matters. The accuracy of Brendel's playing was a hallmark his mature years, and while he does trip over his fingers once or twice in some of the fastest passages here, the general impression is of masterly technical competency.
These Beethoven Sonatas are very good, while his Philips recordings are truly great. So what's missing here that he later added to his interpretations? Well, many of the sonatas, and the later sonatas in particular, lack depth. It is quite difficult to pin down exactly what that amounts to, but there is a sense of poise in his later recordings that you don't quite get here. On the technical side, the gradation of dynamics is not as subtle. (There is less weight in the bass too, but that is probably a result of the earlier sound recording.) And in the later recordings, Brendel is always able to make the most of the surprises, those sforzandos and things that, even though you know they are coming, still startle when performed by the greatest players.
So perhaps it is a feeling for the drama of the music that he developed in the 70s and 80s that is missing here. But it is only the later sonatas that rely on the theatrical for their structure and musical logic. As a result, the best playing on this cycle is to be found in the earlier sonatas. The way that Brendel can present often quite generic 18th century textures without affectation and always avoiding cliché, that's a real gift and it makes these early recordings of Beethoven's early sonatas something really special.
And the later sonatas are well worth hearing too, just so long as we give Brendel the benefit of the doubt, and bear in mind that, while he hadn't managed it in the early 1960s, he would go on to become one of the greatest Beethoven interpreters of the 20th century. The audio isn't bad for its time, although as I say, the bass lacks weight (a real shame with Bendel), and the upper frequencies are lacking too.
If it wasn't for Alfred Brendel's own protestations in support of his later work, I'd happily recommend this box, especially given the price. I can recommend it as a historical document, in that it was this set that first put Brendel on the road to international recognition. Listening to it, you can tell why that is. Everything on it speaks of the immense potential of the performer. We are now in the fortunate position of being able to hear what happened when that potential was realised. Those later recordings will cost you a lot more money, but if you hear this set without hearing Brendel's later work, you're really only getting half the story.
Gavin Dixon
This review first appeared at MusicWeb International:
http://www.musicweb-international.com/classrev/2011/Jan11/Beethoven_Brendel_94075.htm