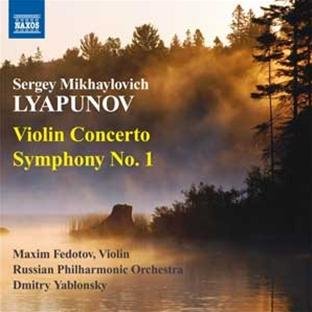 Buy from:
Sergey Lyapunov is one of the more agreeable of the also-rans of Russian Romantic music. He was closely associated with Balakirev, even more closely, it seems, than were the rest of the Russian Nationalist School. They were a pretty close-knit bunch though, and the stylistic traits you will hear on this disc hark back not only to Balakirev himself, but also Mussorgsky, Borodin and Rimsky-Korsakov. The First Symphony, in particular, is full of the sort of music you'd associate with Borodin and RK. Those tutti punch chords that punctuate Borodin's symphonies are everywhere apparent in the outer movements, and the long flowing melodies of Scheherazade have significant paralels in the inner movements. Interestingly, though, we are not necessarily talking about one-way influence here, as the First Symphony is almost exactly contemporaneous with Bordin's First and Rimsky Korsakov's Scheherazade.
The Violin Concerto is a relatively late work, its final version dates from 1921. Surprisingly, there is little influence from Glazunov's famous concerto here. Lyapunov is much more focussed on thematic development than Glazunov. That's a sad irony, because, like Glazunov, he isn't very good at writing memorable tunes. Still, both the violin and the orchestral writing is very imaginative and idiomatic. It's in a single movement, ranging between a variety of different tempos and moods. Maxim Fedotov gives an excellent performance. His style is just Russian enough, i.e. he is able to really lay into the strings for the fortissimo double stopping passages, but he is also happy to pull back for the quieter and more reflective passages. Even there, though, he has a substantial, quite guttural tone. It's not sweet as such, but it is very attractive and always interesting.
The First Symphony is a much earlier work, and its various weaknesses show all the signs of compositional immaturity. There is an almost obsessive reliance on thematic coherency, almost to the extent of monothematicism, and the structure is generic to a fault. On the other hand, the orchestration is imaginative, especially the use of the lower woodwind and brass (there's not much for the percussion though), and the deliberately Russian flavour of the music gives a real sense of character to every phrase.
You could be forgiven for not having heard of the Russian Philharmonic Orchestra. They are better known as the Moscow City Symphony Orchestra, and were founded by the city council in 2000. So they are presumably yet another product of the populist largesse of mayor Yuri Luzhkov that kept him in popular favour for so many years. Whether Moscow needed another orchestra is another question, but given their high standards of performance on this recording they are certainly justifying their existence. This is an ensemble to whom the Russian national style comes very easily indeed. Technically, there isn't much here to challenge them, but when Lyapunov spotlights underused corners of the orchestra, they always come out shining. The trombone section deserves a special mention, they have a real Russian trombone sound, directed and focussed but never narrow. It is the sort of sound that brings to mind the Leningrad Philharmonic in their Mravrinsky days.
The recorded sound is good, unusually good for Naxos. I'm particularly impressed by the way the solo violin sound has been reproduced. He is placed well in front of the orchestra, and very close to the microphones. That could be a dangerous approach, but it really works, giving him a real sense of immediacy, almost as if he were in the room with you. The orchestra comes across well on the recording too, especially the woodwind and brass who have real definition in the symphony.
A very interesting new release then from Naxos. In a sense, they are going back to their roots by hiring an Eastern European orchestra to play lesser known music from their own country. That 's how the label made it big in the 1980s, and as this disc amply demonstrates, it is an approach that can continue to work wonders.
Gavin Dixon