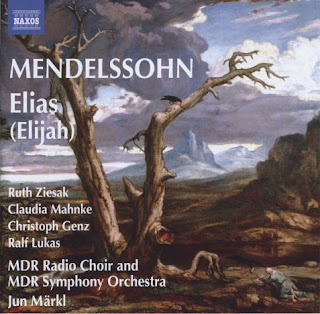 'Elias' is quite a tour de force, at least by Mendelssohn's standards. Musically it is one of his most diverse works, and he makes the most of every opportunity for choral counterpoint, for elegant vocal solos, for atmospheric scene setting...the list is almost endless. On the other hand, the composer's discipline is everywhere apparent, and the finely judged proportions of the work are surely a key to its success. In fact, the oratorio tradition in the 19th century was almost as strong as in the 18th, yet only two works from it survive into the modern repertoire, and both are by Mendelssohn: this at St. Paul. To modern ears, the influence of Bach is an interesting dimension of this music. It was written only a few years after Mendelssohn's rediscovery of the Matthew Passion, and the links between the two works are undeniable, not least in Mendelssohn's skilfully polyphonic use of the choir.
The work's continuing popularity, not least with amateurs, belies the difficulties it poses for performers. True, Mendelssohn has a knack for creating the maximum dramatic effect with the minimum of technical difficulty, but he still expects a high standard of musicianship from soloists, orchestra and choir alike. The greatest strength of this recording is that the performers all work to almost uniformly high standard. The MDR Radio Choir display a unity of intent that is all too rare among large, amateur choruses. Perhaps their numbers have been reduced to improve the ensemble, but if so, they still manage to pack a punch when needed.
Among the soloists, the most distinctive is the soprano Ruth Ziesak, who brings a sense of operatic scope to the proceedings. None of the other singers are quite as distinguished as her, but all put in fine performances. Mendelssohn often writes for the soloists as an ensemble, and the minimal vibrato of the other singers allows these movements to cohere elegantly. That said, the timbral contrast between two male soloists, the tenor Christoph Genz and the bass Ralf Lukas, is a real benefit to many of their duet recitatives. Genz has an unaffected purity of tone, while Lukas has a slightly more constricted and impassioned sound. There aren't many roles where that sort of sound production is appropriate to the bass voice, but the title role of Elijah is surely one of them.
If I have one complaint about the performance it is that it lacks urgency. Jun Märkl shapes the movements well, but the tempos are often too static and the orchestra rarely takes the music to dynamic extremes. There is so much potential drama in this music that is only occasionally realised by this performance. It is as if we are presented with a rendering of the score rather than an interpretation of the music.
The sound quality too is serviceable without ever being exceptional. For a studio recording it is surprising how distant the choir, orchestra and even the soloists sound. That makes for a very homogeneous sound, so Mendelssohn's elegant harmonies are much more in evidence than his ingenious counterpoint.
Why is this recording sung in German? Two obvious reasons spring to mind: it was written in German and it is recorded in Germany. But it was premièred in English (in Birmingham) and Naxos is no doubt planning to sell this recording around the English-speaking world. Given the label's comprehensive approach to the repertoire, their long term plan is probably to release recordings in both languages.
If they are planning to ever revisit this work, a performance on period instruments would also be welcome. What a shame to read the ophicleide part in the score and not be able to hear it. Some narrow bore trombones would also make for more interesting textures in many of the choral movements.
No point though in complaining about what this recording is not. What it is is a perfectly serviceable Elijah, with no frills in the recording nor any in the packaging. Naxos don't go in for printing librettos, but I'm surprised they didn't make an exception here as it would easily have fitted in the liner. A budget price Elijah in every sense.
Gavin Dixon