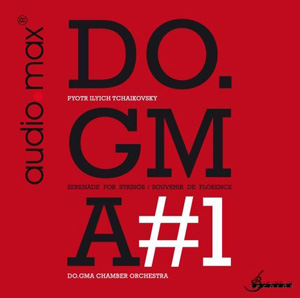 This disc promises new interpretations of familiar classics, but innovations are thin on the ground. The do.gma chamber orchestra is made up of young musicians and is led by the equally youthful Mikhail Gurewitsch. They are a competent group and the technical side of their playing isn't bad at all, but despite their claims to the contrary, they have nothing radical to say about this music, making for pleasurable but predictable results.
For most conductors, Tchaikovsky's Serenade for Strings is an excuse to show off the dramatic power of their orchestra's string section, a whirlwind ride through every shade of emotion you might find in a Tchaikovsky symphony, only without wind or percussion. Gurewitsch, in contrast, seems to take the generic title at face value, and directs a performance that is more in the spirit of Mozart or Haydn. There is no grandeur in the first movement (which is unusually fast), little passion in the Valse or Elegia, and the Finale, while it is admittedly longer than its material justifies, feels longer still for the rigid performance it gets here.
Souvenir de Florence comes off better. There is a bit more drama here, and a bit more expressive rubato too. The work is better known in the original version for string sextet, so performing the version for string orchestra gives the players a natural advantage in terms of symphonic power, and for the most part they make the most of it. Like the Serenade, and indeed many of Tchaikovsky's works, the Souvenir poses a challenge to performers in the dichotomy between the Romantic passion of the music and the Classical structuring of the individual movements. For the most part, they veer towards the Romantic in the Souvenir, which makes for a greater sense of engagement from the listener's perspective.
The audio is good, but by SACD standards it is not exceptional. The individual lines all come through OK but the orchestra always feels a bit homogenised. Some moments of shaky intonation don't help either, although they are mostly isolated to brief exposed episodes. The stereo array is interesting, in that the first and second violins are placed on opposite sides, emphasising the stereo effect at the top of the ensemble, while distributing the bass more evenly. Every time I hear one of these MDG 2+2+2 discs, I wonder what the six channel mix sounds like, and I'll confess to not having the technology to find out myself. Perhaps greater efforts have been made there to draw the listener into the mix than have for the stereo mix.
Perhaps the problem with this disc is the coupling. Despite the fact that Tchaikovsky himself wrote or arranged both works for string orchestra, and the fact that they are of similar length, the fact remains that the former is very much a symphonic work while the latter fits squarely into the chamber repertoire. The two works can retain their respective symphonic and chamber identities, however many players are involved in a performance, provided the right stylistic approach is taken. This recording tries to bring the works together somewhere between the symphonic and chamber music worlds. That might provide continuity across the programme, but does both works a disservice.
Gavin Dixon