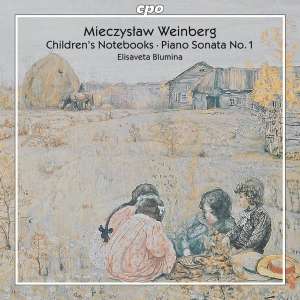 The music of Mieczyslaw Weinberg has been gradually finding a worldwide audience in the 15 years since he died. It has been a long and painfully slow process, but performers are gradually rediscovering his works, which are prolific and accomplished, and which seem to cover pretty much every important genre and instrumental combination. 2011 could be something of a breakthrough year for the composer, at least in the English-speaking world, with the UK première of his opera 'The Portrait' at Opera North, and a handsome new biography by David Fanning (admittedly published in Germany, but in the English language).
Comparisons are difficult with Weinberg. He was a close friend of Shostakovich, and his music shares many traits with that of his more famous compatriot. Weinberg's Jewish heritage often shines through in the melodic identity of his music, creating a clear parallel with Shostakovich's works with Jewish themes. And there is a darkness to Weinberg's music that often matches Shostakovich when he is at his most morose. But what distinguishes the two men is Shostakovich's talent for irony, for creating interacting, and often opposing, simultaneous levels of meaning. That can provide essential levity to Shostakovich's music, but is sorely lacking in Weinberg, especially when he is at his most serious.
Thankfully, the works on this disc find the composer in a different frame of mind, all are serious and dramatic, but in general the textures are lighter than typical Weinberg. This disc presents the composer at his most approachable, making it an ideal introduction to his music.
The Children's Notebooks were written for the composer's 12 year old daughter. She must have been an extremely competent pianist, because these aren't easy at all. If he gives her any concessions, it is in the number of notes on the page. That is perhaps what makes the pieces more approachable than most of his other music, the (relative) lightness of texture. Dramatically, though, they are anything but light, and the 23 movements move between a wide range of emotions and temperaments. The music was written in 1944-45, and even though the family had been evacuated to Uzbekistan, it is easy to tell from the music that there is a war on.
From an interpretational point of view, the lighter textures of the music are perhaps more of a hindrance than a help. They mean that the pianist is required to evoke intense drama, but with few resources. Elisaveta Blumina gets the tone just right. There is plenty of turbulence here, and plenty of drama. But she also maintains that valuable clarity that makes these works so attractive. There is also an impressive coherency about the reading, a sense of stylistic logic that allows each movement to follow on from the last, often in spite of radical contrasts of mood and texture.
The First Sonata is a more substantial affair, with more notes, more drama and more structural innovation. In fact, Weinberg seems to be actively opposing expectations throughout the work. As with the Children's Notebooks, a melodic lyricism allows each of the movements to flow with relative ease, despite the wide variety of textures and harmonies going on underneath. The Sonata is an early work, written when the composer was only 20, and this may explain why this, too, is lighter in mood and style than his later chamber music and symphonies. The exception is the finale, which is as complex and dense as anything in the Soviet piano literature. So for a few minutes at the end of the disc we are in Prokofiev territory with colossal left hand arpeggios and everything in the right hand doubled in octaves. None of which poses any problems for Elisaveta Blumina, who seems to relish these more involved textures after the relative lightness of what has gone before.
An excellent introduction, then, to the unique music of Mieczyslaw Weinberg. The number of Soviet-era composers whose work is under-appreciated in the West is depressingly long, but the gradual increase in interest in Weinberg may mean that he can soon be struck from the list. The string sonatas and symphonies are the works that have been doing the rounds in recent years, but as this disc demonstrates, there is much in his output that should be of interest to pianists as well. Certainly, the Sonata deserves a place in the repertoire, and hopefully this excellent recording should help it to secure the reputation it deserves.
Gavin Dixon