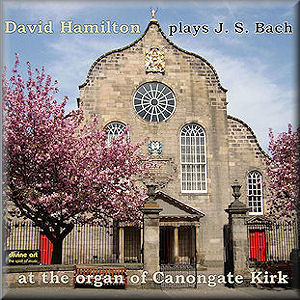 David Hamilton is clearly a fine organist, but there's no doubt that the instrument is the real star of this disc. It was built by Th. Frobenius of Copenhagen in 1998 and is in tip-top condition. Like the kirk itself, the organ isn't big, just two manuals and a registration that fits comfortably on half a page of the liner notes, but this is definitely a case of small is beautiful.

It is much more common to meet discs of popular Bach selections played on huge cathedral organs, but what this organ lacks in power it makes up for in the precision of the sound and the subtle combinations of the tone colours. Hamilton avoids the temptation to concentrate solely on the small-scale works and includes two of the behemoths: the Passacaglia in C minor BWV582  nd the Prelude and Fugue in E flat major BWV 552. The Passacaglia in particular sounds great at this chamber music scale, and all sorts of contrapuntal devices and inner lines become apparent that larger organs usually obscure.

Clarity and evenness of tone are the main virtues of this instrument, and of Hamilton's registration choices - just because there are less stops to pull, that doesn't make the decisions any easier. In the Adagio second movement of the Toccata in C minor BWV564 the voicing of the individual notes of the melody is immaculate. The opening movement also benefits from the clean, well defined sound, and the grace notes in the main theme are actually heard as pitches, another detail that is often lost on larger organs. There isn't much in the way of mutation or colouristic devices in the registration. The only piece to use a more constrained, nasal stop is O Mensch BWV678, and even that has a relatively open tone.

Hamilton is quite conservative in his use of ornaments and his rubato is either non-existent or so subtle as to be imperceptible. The result is a series of very clean interpretations, an approach ideally matched to the tone and scale of the instrument.

The sound quality is good, and it seems that the organ and the acoustic are ideally matched. There is very little resonance - for a church I mean - but enough to give the organ sound a satisfying warmth. The bass in the recording is excellent, clear and focused and not artificially amplified, or at least not obviously so. The bottom end of the organ is actually quite meagre, the pedals have two 8' stops and two 16', but that's plenty, even for the Passacaglia.

An enjoyable disc then, and not your usual Bach greatest hits. This may be the absolute core of the organ repertoire, but it does have a tendency to bring out the worst excesses of megalomania in professional organists. David Hamilton demonstrates how a little humility can go a long way.