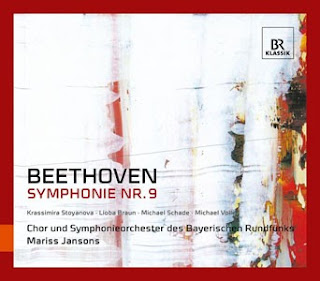 This SACD records a significant event in the history of the Bavarian Radio Symphony Orchestra, a performance before a papal audience no less. The Pope is himself Bavarian, of course, so spending state broadcaster's money on the jolly isn't quite as profligate as it might first appear. And whatever the politics and logistics behind the event, they treated him to a cracking performance of the Choral Symphony. There are plenty of recordings of the piece on disc, but this one easily holds its own in the face of almost any competition.
Unlike some conductors today, Mariss Janons goes for steady speeds in most of the music. That can lead to a lack of propulsion, but never to a lack of intensity or involvement. The sheer quality of the playing the emotional engagement of every single player, no doubt sharpened by the occasion, make this a very special performance indeed. So often, the practice of recording concerts live for orchestras' own labels can seem a mere financial convenience, but this recording demonstrates how it can really work to benefit the result. There is a sense of atmosphere in every single bar that you could only get from a live performance, and a top notch one at that. Mariss Jansons has been doing these live recordings for a few years now, and not just with the BRSO, and he really knows how much he can rely on that atmosphere. So those slower tempos, especially in the first movement, they work because he does not need to relentlessly drive the orchestra on to get the energy he needs. And there is never any suggestion of laziness or letting up of emotional intensity. He even resists racking up the tempo and dynamics in the coda of the first movement, and he gets away with that too. Instead of the usual rush for the double bar, we hear the individual notes of the string scales and the round, almost understated intensity of the woodwind chords. Of course, he does go for it in the Coda of the finale, but his restraint up to that point only makes those final bars all the more intense.
The interpretation of the finale here is quite a complex business. Jansons is clearly intent on expressing more with this music than a mere 'Ode to Joy'. His reading of the finale is filled with darker undertones, which like in the preceding movements often result from the combination of steady tempos and crystal clarity in the orchestral textures. Whatever Jansons adds interpretively to the finale (and ultimately it is up to the listener to find their own interpretations of his revisionist approach) there is a continual sense of furrowed-brow conviction that prevents the listener from taking anything at face value. The liner note quotes Bekker, Adorno and other 20th century musical luminaries to demonstrate the necessity of this sort of approach in the modern world. And it is hard to question that necessity without resorting to an ontology of music based in pure escapism.
So it is a reading to make you think about, as much as enjoy, the music. Don't get me wrong though, it is an enjoyable listen too. The sound quality is very good, another reason recommend this over most Beethoven 9s. Bavarian Radio took their own team to the Vatican, and the result is almost the equal of their recent BR Klassik recordings from Munich. But unlike Munich's Philharmonie am Gasteig, the Paul VI Audience Hall is not a dedicated concert hall, so the acoustics are inevitably inferior. In fact, given the gargantuan size of the hall (only part of which is actually in the Vatican City) the engineers have done an impressive job. The clarity of the string sound is particularly good, as is the intensity of the choral sound. The woodwind and brass sections perform as well as any I've heard on a Beethoven 9 recording, and the audio does them full justice. (Incidentally, that solemn tone that Jansons maintains throughout the finale is not compromised by the contrabassoon passage towards the end, and while it usually sounds quite flatulent, the player here manages a focussed and dark tone.)
So, you don't have to be a Catholic to enjoy this recording, nor do you need to know anything about the circumstances of its performance, which is just as well because the liner notes don't go into very much detail. It is a thoroughly modern Beethoven 9 though, and one that takes nothing for granted. Jansons yet again demonstrates the deep intellect behind his conducting approach, and like many of his BR Klassik recordings to date, the result is a distinctive and deeply felt reading that presents one of the most well-known works in the repertoire in a surprising new light.
Gavin Dixon