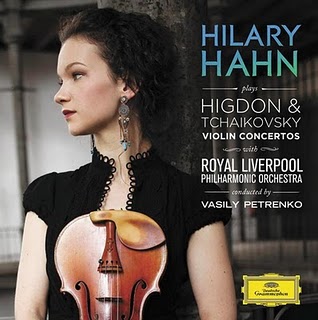 There is so much of musical interest in Jennifer Higdon's Violin Concerto that it is difficult to pin down exactly what it was that endeared the work to the 2010 Pulitzer committee. It is a work of almost continuous invention. It also has impressive momentum and focus. The sound world, so far as is is possible to generalise, is American, and like most of her compatriots, Higdon is only ever a few stylistic steps away from Stravinsky. The music is reminiscent of John Adams, but with more edge and more drive than even he can muster. Repeated listening reveals that a wide array of percussion effects are used to underpin the many diverse textures. Impressively, though, most of these are very subtle, adding propulsion and colour to the orchestral textures from within.
As is probably obvious by now, I'm having a lot of trouble putting this work into words. Structurally it is in a fairly conventional concerto form, so that is at least one handle for listeners, but beyond that innovation is the key feature. The solo part is not overtly virutosic, although it is clearly very difficult. As with the orchestral writing, the solo line is all about exploring the timbral possibilities of the instrument, and combining them into a sweeping lyrical line. There is little tonality or modality here, yet the music always sounds like it is grounded in some sort of compositional theory, I'm just at a loss to describe exactly what it is.
The performance is excellent. The work is quite sectional, and Hilary Hahn is never fazed by the successive gear shifts and changes in style, dynamic and technique. There is something quite grounded and earthy about her tone that suits this music well. But there is plenty of variety in her sound too, an essential attribute in a work that depends so much on musical variety for its substance.
The Tchaikovsky too is given a solid and musically substantial reading. Hahn again plays with a rich, complex tone, but that doesn't mean that she is unable to sing in the more lyrical passages. She retains an impressive sense of control over the music, and there is little recourse to overt rubato or portamento. I love her vibrato in the Tchaikovsky, it is narrow, fast, and so subtle that you don't even realise it is there unless you listen in hard. The slow movement is a little faster than usual, and a bit more matter-of-fact than you might find elsewhere, but removing some of then traditional sentimentality does it the world of good.
I hardly need mention that Hahn's performance is technically note perfect, and the same goes for the orchestra. And while this disc is undoubtedly a feather in the soloist’s cap, it also joins a long and growing list of top quality recordings involving Vasily Petrenko and the RLPO. The orchestra take everything in Higdon's score in their stride, including a range of extended techniques. Just as impressively, it seems Petrenko resisted the temptation to devote the whole rehearsal time to the new work, as the orchestra also puts in an impressive performance in the Tchaikovsky. Special mention should go to the woodwind, who are on glowing form, and are magnificently served by the sound recording.
A good recording then on all fronts. Jennifer Higdon is not yet a household name over here, so perhaps America is the target market for this disc. I notice though that the London Philharmonic has recently released a recording of her Percussion Concerto, so it is probably just a matter of time. And of course, we are already familiar with the talents of Hahn, Petrenko and the RLPO, all of whom are on fine form here.
Gavin Dixon