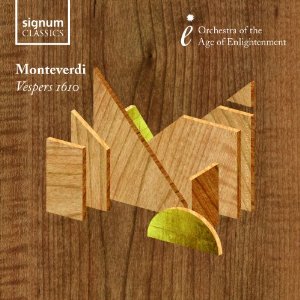 2010 marked the 400th anniversary of the publication of Monteverdi's Vespers, which for the Orchestra of the Age of Enlightenment was the ideal excuse to spend the year touring with the work. This recording was made at the end of the tour, partly to document what the orchestra had been up to and also to launch their new own label – OAE Released.
If there is one crucial lesson about the Vespers to be learnt from this recording it must surely be that the work does not belong to John Eliot Gardiner. Having said that, given the ubiquity of Gardiner's recording it is to the credit of Robert Howarth and his OAE forces (many of whom played on that earlier recording) that this is not a radical departure from Gardiner either. There are differences certainly, but like Gardiner, Howarth strives throughout to combine contrapuntal detail with flowing lyrical melody.
The biggest difference between the two recordings is the acoustic, and the sound of Hall One at Kings Place, warm as it is, differs radically from that of St Mark's Basilica. Howarth makes the point in the liner notes that both acoustics are appropriate; Monteverdi wrote the Vespers before his move to Venice and for a smaller chapel. However, he also revived them when working St. Mark's, so he would have had personal experience of the work in both contexts. The major benefit of the dryer acoustic is that the detail of the orchestral sound is never compromised by the resonance. The continuo in particular is a constantly audible presence, which really helps to clarify the musical structure of many of the movements. The playing and singing are excellent throughout, and the recording clearly benefits from the repeated performances the group gave of the work in the months before the recording. As well as the continuo group, the upper strings deserve a special mention, as do the almost impossibly virtuosic cornetto group.
Howarth does away with the plainchant introductions to the movements, a decision that makes perfect musical sense to me, although those of a more theological bent may disagree. The Magnificat is included as the filler on the second disc, and I'd much rather hear that than the plainchant between the Vespers movements. Generally speaking, the tempos are quite relaxed, yet the music retains its momentum through the concentration on line by each of the players. The dryer acoustic could accommodate some faster tempos, which might have been interesting, albeit on an experimental basis, although in the longrun, the more disciplined speeds here are probably the more sensible option.
The arrangement of the choir is interesting. Howarth explains that the original parts are for voices with very wide tessitura. He speculates that Monteverdi was looking for a very particular sound that he could only achieve by stretching the singers beyond their normal range, especially at the top. In an attempt to recreate this, Howarth pairs up singers of adjacent voice groups ie soprano/mezzo, mezzo/alto etc. and has these pairs sing the original parts. In these times of austerity for renaissance choral music, the fact that more than one voice sings each part may be controversial, as may the use of women's voices. To my ear, it all adds up, because the detailed yet varied sound of the choir is the perfect complement to the sound of the orchestra. And the use of ladies voices is fully vindicated by the sheer quality of the voices in question.
If there is one thing I miss about 'Gardiner Vespers Sound' when listening to this, it is that monumental quality that he often draws from the larger choruses. That is partly a result of the combination of large choir, doubling choral lines in the orchestra, and the basilica acoustic. However, it is also something that Gardiner fosters by dwelling on those huge, warm harmonies. Howarth tries a bit of that too, but at this smaller scale it remains little more than an aspiration.
Otherwise though this is an excellent recording, and an auspicious start to the OAE Released project. Quite how this label will develop is hard to anticipate at this stage. They are not yet making much of an effort to separate its identity from that of the parent label Signum, but when they do, it will be interesting to see if they market these CDs as creatively as they do their live events.
Gavin Dixon