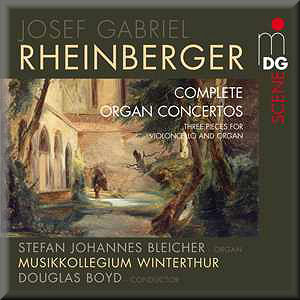 
Josef Gabriel Rheinberger was a native of Lichtenstein, so it’s not surprising that his music shows the influence of both the German and the French traditions. In fact, he spent most of his adult life in Munich, which by the end of the 19th century had become established as a centre for catholic church music. Even so, much of the organ writing here recalls Franck or Saint-Saëns; it has that flowing quality that typifies so much French organ music of the time. On the other hand, these works, and the Second Concerto in particular, are founded on rigorous German thematicism, and the epic qualities of many of the tuttis come straight down the line from Beethoven via Brahms.
The Second Concerto opens the programme, and is the most engaging and convincing of the works on the disc. The three note motif on which the first movement is based is the same as the opening notes of the Enigma Variations, not that I'm suggesting direct influence on Elgar. It's a completely different sort of work anyway. Despite its scale, it is curiously modest in the use of resources. The orchestra includes woodwind and brass, but most of the textures involve string accompaniments to the solo organ. Given the size of the organ, the registrations used are also modest. Getting the balance right in music like this must be a nightmare. They do manage it, but you often get the feeling that the organ has been subdued because of the small string section, which I assume is an economy rather than a period feature.
Three pieces for cello and organ are slotted between the two concertos. Tables are turned here, and the organ becomes the accompaniment rather than the soloist. The music is pleasant but not particularly distinctive. It is worth listening to though for the cello playing by Cäcilia Chmel, who puts everything into the performance, a real solo turn.
The First Concerto is, if anything, even more modest than the second. The orchestra is made up of strings and horns, but you really have to listen hard for the latter. This earlier work finds Rheinberger approaching the combination of organ and orchestra from a different angle. So rather than sustained textures from both, we more often find block chords in the organ decorated with cascading string figures. There are also more unaccompanied organ solos, which is another legitimate approach to the potential ensemble problems.
These works are very much of their time, which is something you can't necessarily take for granted at the end of the 19th century. There are very few allusions to baroque technique, a few brass chorales here and there in the Second Concerto, and some development by sequences in the first. Nor is the aesthetic forward-looking in any real way.
The result is satisfying if comfortable listening, and the performers are happy for it to remain so. Douglas Boyd doesn't add any extra contrasts of dynamics or articulation to the few he finds in the score. The orchestra itself play well, although I doubt they are particularly challenged by this music. And organist Stefan Johannes Bleicher is similarly modest, especially given the resources at his disposal. A case could equally be made for bringing the organ right to the front of the mix – they are organ concertos after all – but this more even balance surely benefits the music more.
The SACD audio is good, although again there isn't much here to pick out in terms of orchestral detail or contrapuntal complexity. Instead the recording aims for, and achieves, those alternative virtues of high definition audio: atmosphere and presence, and never to the detriment of the detail, such as it is.
Gavin Dixon
This review first appeared at MusicWeb International:
http://www.musicweb-international.com/classrev/2011/Feb11/rheinberger_mdg90116436.htm