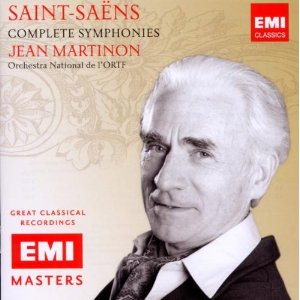 To call Saint-Saëns' output uneven is to put it mildly, and this cycle of his symphonies demonstrates what a problem that can be. The Third is far and away the best work here, and the other four symphonies don't even come close. But that doesn't mean they're not worth listening to. The difficulty is in forgetting about the Third while you're listening to the others and considering each on its own terms. In fact, EMI would have done Saint-Saëns' first four symphonies a real favour by omitting the Organ Symphony altogether, although I don't think their accounts would warm to the idea.
Another big problem for Saint-Saëns was his prodigious juvenalia, and among the child prodigy composers throughout musical history, he was surely amongst the busiest in his early years. The three unnumbered symphonies here are the largest-scale of his early works. The Symphony in A dates from around his 15th year, while the Symphony in F 'Urbs Roma' was written as an entry for a competition, one that he won without too much trouble.
But he was wise not to publish or number either of those works, as they pale in comparison to the other three. The unpublished symphonies show proficiency in terms of orchestration and in generally fulfilling the generic requirements of the form. But they lack originality, and there isn't much direction to the music. On the other hand, they provide excellent preparatory listening for those seeking to contextualise the mature symphonies. The primary influences on all of Saint-Saëns' symphonies seem to be Bach, Mozart and Beethoven, the latter mediated by Schumann. Listening to the youthful symphonies, it is fascinating to hear how the composer takes Mozart as the starting point for a symphonic style that takes its formal responsibilities lightly. Inner movements are always sprightly and never far from the rhythm of a dance. And the outer movements tend towards the grandeur of Beethoven, but there is always a sense of reticence (typically French) towards the pomposity of Beethoven's strident, heroic style.
Of the first two numbered symphonies, the Second is by far the superior. It is definitely the closest in style and accomplishment to the Organ Symphony, and like its more famous successor, it successfully conjoins the Baroque counterpoint of Bach, the Classical opulence of Beethoven, and the French Romantic warmth that is distinctively Saint-Saëns. The fugal, or at least contrapuntal, first movement has shades of the Organ Symphony's finale, while the stately second movement takes us back to Mozart, not as pastiche, but rather as fully digested influence.
To my knowledge, this is the only available complete set of Saint-Saëns' symphonies, but this is at least it's second, and possibly its third, appearance on CD. That said, each of the symphonies is available elsewhere, and I think the BIS and ASV between them could offer the full set. However, it is only really the Third Symphony that is subject to rigorous competition, and by modern standards the performance and recording quality are reasonable at best. Jean Martinon and his players never exaggerate anything in the music, which means we are thankfully spared some of the worst interpretive excesses that can befall the finale. On the other hand, they are often relaxed to a fault, especially in the first movement, or rather the first half of the first movement if we are to follow the composer's bipartite scheme. Where other conductors would inject some momentum where the exposition emerges from the slow introduction, Martinon continues at a relaxed pace, and continues in that vein for pretty much the whole symphony.
The roundness of the string sound is bonus, as is the definition of in the bass. But the string ensemble is loose by modern standards, and the woodwind aren't much better. The best playing from the orchestra comes from the brass and percussion. The solo trumpet is distinctive and has a wonderfully slow, narrow vibrato, it's almost a spaghetti western sound. The timpanist has his work cut out in this symphony and he (I'm assuming) really makes the most of it. That focussed penetrating tone of the lower timps provides the perfect compliment to the roundness of the string sound.
Generally, the sound quality is good for the early 70s, but never exceptional. For obvious reasons, the orchestra moves into church – Les Invalides no less – for the Organ Symphony, but the engineers manage to retain the apparent resonance at concert hall levels. The piano is artificially amplified in the finale to the point of excess, while the balance between the organ and the orchestra is just about right.
But you're not going to by this set for the Organ Symphony. It is the first and second numbered symphonies that make this set worthwhile. I've no doubt that both works appear somewhere on a to-do list at Naxos, but until they get round to it this is probably the best of the few options available.
Gavin Dixon
This review first appeared at MusicWeb International:
http://www.musicweb-international.com/classrev/2011/Jan11/Saint-Saens_6318042.htm