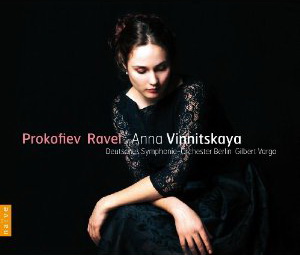 This is a seriously impressive recording. The Prokofiev Second Concerto isn't the sort of piece you can make sound easy, but Anna Vinnitskaya's control at the keyboard is astonishing, and her playing is near enough faultless. Not many pianists would dare programme the work for their orchestral début recording, but it is clearly the right choice for her. And there is subtly here too, her dynamics range for the barely perceptible to the thundering, and both the gradual dynamics changes and the sudden shifts are handled with expert precision.
Precision and control are words that come to mind with the Ravel too. Like the Prokofiev, it is given a clean no-nonsense reading, and like the Prokofiev it is a work that responds very well to it. She approaches the jazz inflections as one might in Gershwin, with warmth but without any sort of stylistic exaggeration. Much of the passagework in the Ravel is presented with a muscular tone and plenty of rhythm. The piece responds just as well to more wispy and introverted approaches, but played like this it forms the perfect coupling for the Prokofiev. And whatever your views on the relative merits of the two composers, the Prokofiev is definitely the main feature of this disc, to the extent that you often feel his presence somewhere in the background of the Ravel.
Much of the rhythmic drive in Vinnitskaya's playing comes from the left hand. She never lets the melody lead her, not even in the slow movement of the Ravel, instead keeping a rigorous balance between the two hands. If anything, this makes the virtuosity in the Prokofiev even more impressive, the focussed stability of the left hand acting as the perfect complement to the more dazzling passagework of the right.
Naïve are clearly aware of what a huge star they have on their hands, so they've been sure to team her up with a top-class conductor, orchestra and sound team. The Deutsches Symphonie-Orchester Berlin have an excellent recent track record on disc, and this one is no exception. The orchestra has a busy time of it too, especially in the Ravel, and their performance is up to the same high standard as the soloist. The unity of the string sound is as good as you could want, and the crispness of the various woodwind solos in both concertos perfectly matches the precision of Vinnitskaya's touch.
The engineering too is superlative. Even the sound engineers are stretched in this repertoire. Both composers write well for the orchestra, but they both throw in experimental textures that could easily disrupt the delicate balance between soloist and ensemble. Surprisingly, both the piano and the orchestra are crystal clear throughout. While the engineers should take much of the credit for this, it is also worth considering what Vinnitskaya's technique offers in this respect. For much of the Prokofiev, it sounds like she is playing full whack, but the fact that so many of the details of the orchestration remain audible suggest that she is achieving this muscular tone at a range of lower dynamics. How does she do it? It's a complete mystery to me, but I can't wait to hear some more.
Gavin Dixon