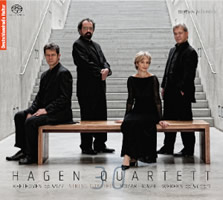 
The Hagen Quartet is 30 – so happy birthday to them. String quartets seems to hold together better than most ensembles, but even so, 30 years is good going. They still have three of their original members as well, siblings Lukas, Veronika and Clemens. Their recorded legacy over the period has been little short of phenomenal. They seem to have abandoned the (sinking?) DG/Universal ship in recent years, but they've been picked up by the Myros label, who are now releasing their work in good quality SACD audio, so their fans have no cause for concern.

There is an interesting interview in the liner notes for this 30th anniversary release. It is never stated which of them is answering the questions, and all the answers are phrased in the first person plural, which reads quite strangely. Nevertheless, the main point that is made is that the quartet have gradually moved their priorities in recent years towards directly expressing the emotion in the music. And that is exactly the impression that this recording gives. The performances and the sound have a real immediacy. There no apparent desire to create atmosphere or a period feel. Instead, the players get straight down to the nuts and bolts, given strident performances with the emotion of the music as the guiding principal.
I'd hesitate to describe anything here as pretty. Despite the spacious recording venue – the Siemans-Villa in Berlin, the recorded sound is quite bare, with little appreciable resonance. Each of the players goes for a focussed, often quite woody, sound. But what it lacks in warmth it more than makes up for in emotional and spacial immediacy. That sense of emotional directness isn't Romantic as such, and it is telling that there are no Romantic era works on the programme. There is little in the way of rubato, and phrases are outlined though subtle dynamic gradations.
These are performances with equal and large measures of emotion and discipline, qualities that serve all three composers very well. Both the Beethoven and the Mozart are given a sense of inner propulsion, the music moving from section to section with a Classical sense of inevitability. The Mozart in particular benefits from the avoidance of sentimentality, allowing it to flow directly on from the middle-period Beethoven as if it were the work of the same composer. And any listeners who harbour suspicions that Mozart's string quartets are trivial will be confronted by the sheer emotional depth that the Hagans find here.
Given the quartet's almost unmatched track record when it comes the 20th century repertoire, it seems a shame that the Webern works are consigned to just a few minutes at the end. Even so, they form the ideal conclusion to the programme. Again the performance is elegant and immediate rather than beautiful, combining an almost geometric sense of the miniature forms with a healthy dose of Expressionist angst. The stylistic continuity from Beethoven to Webern couldn't be clearer, the First Viennese School leading directly on into the Second.
This isn't a CD for putting on in the background, fortunately, as many string quartets out there seem to specialise in that sort of thing. Rather, it is a statement of intent, a demonstration of a particular way of doing things with the quartet repertoire. It is a way that really works, and that presumably takes 30 years of experience to perfect. A fascinating listening experience, and a good omen for the quartet's years ahead.
Gavin Dixon