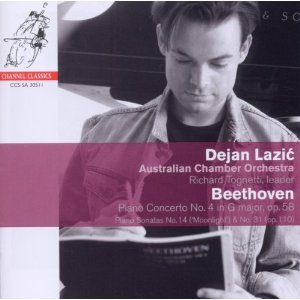 Dejan Lazić makes a big thing of his new approach to Beethoven's Fourth Piano Concerto. A piano quintet version of the work has recently surfaced, apparently by Beethoven himself. It contains more tempo and dynamic markings than the orchestral score, and Lazić has taken to performing the orchestral version with reference to some of these. What this means in practice is that there are some quite abrupt tempo changes in the outer movements, and that some of the quiet transitional passages are taken down a notch or two. They are quite subtle changes though and only warrant attention because they distinguish this recording from the many, many others that are currently on the market at the moment, even on SACD.
Lazić's touch and approach to the work in general are more significant distinctions. Unlike many of his colleagues, he is not really interested in the grandiose or heroic aspects of the work, and perhaps this is why the chamber version appeals to him. There is something very immediate about his interpretation that brings a sense of immediacy, even to the loudest passages. Lazić does more composing, arranging and improvising than most concert pianists, and perhaps these activities contribute to the playfulness and carefree approach that he brings to Beethoven. He plays his own cadenzas for the outer movements, and while they are slightly wayward, stylistically speaking, they too speak of this respectful but always playful approach to the music. The lack of overt drama in his approach risks emotional shallowness, but this is more than outweighed by the freshness that Lazić brings to what would otherwise be overly familiar repertoire.
The Australian Chamber Orchestra play to their usual high and consistent standard. Their experiences of performing on period instruments bring a valuable perspective to Beethoven. Vibrato is kept to a minimum, yet there is plenty of life in the string sound. The stylistic disciple of the orchestral playing, combined with the small size of the ensemble, makes the orchestra the idea complement for Lazić. They are nimble enough to follow his unusual tempo changes, and to match the playfulness of his passage work.
The Fifth Piano Concerto would seem to be the ideal coupling, but neither the soloist nor the orchestra play in a style that would fit that epic score. It's probably just as well then that they refrained and Channel filled the remainder of the disc with performances of Beethoven Sonatas, the Moonlight and the Op.110. To my ear, the Moonlight is the more successful of the two. Like the Fourth Concerto, it is a work that benefits from a light and playful approach. But the Op.110 lacks weight, some of the individual passages are very beautiful indeed, but in needs a sense of solemnity too, which is largely absent.
The SACD sound is, on the whole, very good. In the concerto, the orchestra comes off better than the piano, which sounds curiously distant, while the orchestra, and the strings in particular, have an impressive immediacy and depth of tone. No such concerns though in the sonatas, in which the sound engineers manage to faithfully reproduce both the immediacy and sweetness of tone in Lazić's playing. The concerto and the sonatas were recorded on opposite sides of the world, in Sydney and Eindhoven respectively, but both recordings were made on large Steinway pianos. The fact that Lazić can find such elegant and understated sounds from instruments otherwise known for the weight and projection of their tone is a testament indeed to his phenomenal and unique talent.
Gavin Dixon