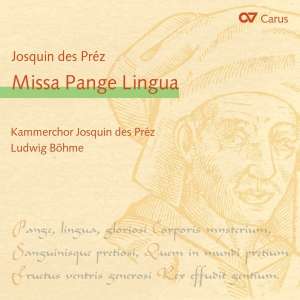 This disc presents Josquin at his most approachable. It is beautifully sung, everything is very even, and little effort is made to articulate the words at the expense of the flow of the music. It is the sort of recording of renaissance music that you can put on in the background for atmosphere.
But there is more to Josquin than that, and especially to his Missa Pange Lingua, one of the most revolutionary works of the 16th century. I'd rather it sounded that way, with more contrast in the tempos, timbres and articulation. There is a famous passage in the Credo "Et incarnatus est de Spiritu Sancto...", which in most recordings sounds like it has appeared out of nowhere, an angelic choir interrupting the human voices of the surrounding passages. In this recording it doesn't quite come out like that, the tempo is slowed slightly for the passage, but otherwise it just forms part of the continuous texture.
Fortunately, this music is very robust; Josquin writes counterpoint so clear that the individual lines will come through in almost any interpretation. And it has to be said that the singing is to a uniformly high standard. This style of performance with very long, joined up vocal lines must pose considerable physical challenges to the singers, who cope magnificently.
The use of a mixed professional choir says more about modern German choral traditions than those of the 16th century. Scholarly opinion favours the view that choral music of the period was sung a fourth or a fifth lower than written. Recordings of Josquin are divided more or less evenly between those who transpose and those who don't. In this recording they don't, partly perhaps because the written tessitura better suits the use of women's voices. The higher pitch adds to the clarity of the counterpoint, but at the expense of atmosphere and solemnity.
The acoustic of the Lutherkirche Leipzig is quite dry, at least for a church. I've no complaints about that, this music does not need a wide halo of resonance to achieve its effect. But they could easily have got away with using a larger church and still maintain the clarity.
The other works on the disc make for an interestingly diverse programme. The first track O virgo viginum Filiae Jerusalem is classic Josquin, a six part motet of wonderfully intricate yet understated counterpoint. Ave nobelissima creatura Tibi, Domina gloriosa is another case in point. This too is a six part motet, and has an impressively varied texture, moving between the extremes of contrapuntal complexity and homophonic stability, and visiting every point between. The other works include the Gregorian Pange Lingua hymn and some canons with very weak links of attribution to Josquin. They're good, but not as good as the real thing.
So on balance, this is competent Josquin, but by no means ideal. In terms of performance practice, there are so many questions unanswered about the choral music of the period that much of it comes down to issues of taste. This recording is aiming to appeal to those who appreciate the professionalism of German chamber choirs and their versatility in performing music of all eras. Usually I'm one of that number, but I like Josquin to sound more gritty, with harder articulation and more tonal focus. Everything here is just too pleasant by half.
Gavin Dixon