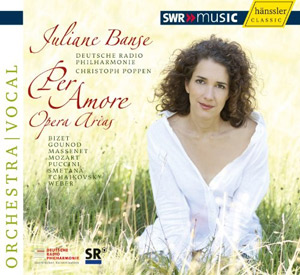 Juliane Banse is best known for her work in the 20th century repertoire, where she clearly excels – just listen to her recent release of Berg and Hartmann on ECM. This disc shifts her focus into the 19th century, and it turns out that she is equally at home in this repertoire.
The programming is at the more popular end of the spectrum, but the styles and nationalities of the composers are surprisingly varied, and every work is a tough sing. Suffice it to say that she makes almost every aria sound easy, and her elegant floating voice nourishes every note. So there are no concerns here about bleeding chunks, it all fits together into a beautifully coherent programme.
Curiously, the first track, Temerari – Come scoglio from Cosi is the exception. Some of the higher notes here seem strained and the evenness of tone that characterises the later tracks is not as evident. But any concerns that she is struggling with Mozart's idiom are immediately dashed by track 2, E Susanna non vien! from Figaro. This is classic Mozart singing, with an ideal combination of power and tenderness.
Those are the two qualities that shine though in the following tracks too. Coming from Southern Germany, she is in an ideal position to embrace the various European cultures represented by Smetana, Puccini, Massenet, Bizet and Gounod. But when it comes to Weber she really excels. And she doesn't necessarily sound like a German singer doing the German repertoire the German way. There is a certain Latin spirit in the way her phrases flow and in the rounded elegance of her vowels. Similarly with the Letter Scene from Onegin, which is delicious, but not in any sense an idiomatically Russian performance. Her vocal support in this track is amazing, and it allows her to continue exploring a wide range of vocal colours, even at loud dynamics and in long phrases.
The Italian and French arias give Banse a chance to show off the precision of her vibrato, which is usually quite wide, but always carefully controlled. That makes her Mimi a real treat, creating that ideal paradoxical mix of frailty and strength. Concluding the programme with Massenet, Bizet and Gounod gives French opera a stronger showing than it usually gets in a mixed programme like this. Banse's French pronunciation is perfect, and these big, passionate arias are the ideal vehicle for her always expressive and always emotive voice.
The Saarbrucken Orchestra give spirited and colourful backing under the baton of Christoph Poppen. The sound is warm but clear. The liner contains in interview with the star, the words to all the arias, and a good number of glamorous pictures of Banse herself. It is a great compilation and it left me wanting more. Highly recommended.
Gavin Dixon