Mahler: Symphony No.4 in G major 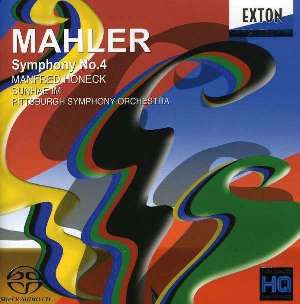 I've been listening a lot recently to Philip Herreweghe's Mahler 4 performed on period instruments. His is a lean account, with little vibrato and no more tempo fluctuations than are strictly necessary. Manfred Honeck's interpretation of the work is at the opposite end of the spectrum, and the contrast between the two recordings is astonishing. Herreweghe demonstrates that the music doesn't need much help from the podium in order to produce drama and profound emotion. Honeck, in contrast, shows that continuous intervention by the conductor can also be musically justified. And the results certainly are powerful and immediate. But it can also feel laboured, as if every detail of the score has to be pedantically spelled out with some heightened articulation or localised rubato. Well, the score doesn't need any of that, although some listeners may appreciate the help Honeck offers in getting to grips with what is, in fairness, a radical work.
The first movement gets off to a brisk start. By speeding up the sleigh-bells on the first page, Honeck is able to glide over that awkward tempo transition in the fourth bar. From then on the first movement is a roller-coaster, with every opportunity for dramatic contrast exploited to the full. The orchestra are on top form throughout, with glistening strings, distinctive woodwind solos, and that warm yet penetrating sound from the brass that you only hear from the top American orchestras. The ensemble of the orchestra is also impressive, especially given many radical tempo shifts that Honeck affects.
Contrast is again the key feature of the second movement, with some excellent solos from the leader, the horn and the woodwinds interspersing tuttis that regularly risk going over the top. Of course, Honeck knows how to maintain control of the orchestra, so the dangers are always illusory. There is a wonderful sense of serenity at the start of the third movement, which is taken surprisingly slowly. But this too soon gives way to yet more intense drama. By about half way through the third movement, it becomes apparent that Honeck is presenting the Fourth Symphony as if it was of the same scale as Mahler's other symphonic works. It is hard to say whether that is an arrogant or an insightful approach. It certainly forces the listener to address their preconceived ideas about how the Fourth is different. And most importantly, it all adds up to a coherent and genuinely originally interpretation.
The volume drops in the fourth movement as the orchestra recedes to an accompanying role to the soprano Sunhae Im. In any other context, I'd say that Sunhae's vocal style is far too florid and operatic for this music, but her performance is exactly accordant with the approach that Honeck has been taking in the previous movements, expressive and direct, if not precisely subtle.
The SACD audio quality is up to Exton's usual impressive standards. In fact, the company is fast becoming the market leader in terms of the definition and vibrancy that they can produce from live orchestral recordings. Of course, you need an orchestra that is up to the job to make this sort of recording project worthwhile, and a very significant factor in its success is the fact that every section of the Pittsburgh Symphony plays to an exceptional standard. I've just one grumble, the bass, impressive as it is, doesn't sound very natural. The Exton producers have clearly gone to great lengths to create the soundscape they are looking for, but in other recordings they manage to disguise their post-production balancing behind a veneer of apparently natural sound. The sheer quantity of bass here, and I'm thinking particularly of the bass drum, is spectacular but hardly realistic. Like the performance itself, the only problem with the recording is a lack of subtlety, and of the all the symphonies in Mahler's catalogue, the Fourth is where you are going to feel that the most.
Gavin Dixon