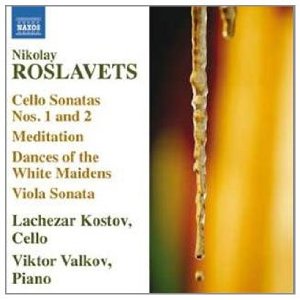 Like so many Soviet era composers, there is a temptation to categorise Nikolay Roslavets asmerely a product or even a victim of his circumstances. But he has such a distinctive compositional voice that the experience of listening to this music transcends any considerations of its situation or the political repercussions of its genesis. The distinctiveness of Roslavets' music partly comes down to the fact that he was one of the few composers writing Modernist music (in the Western sense) in the early years of the Soviet Union. It is distinctively Russian though, and there are strong parallels with the music Prokofiev was writing in Paris at the time. There are similarities with Alexander Tcherepnin, not lest the fact that both composers wrote highly accomplished cello sonatas. There is also an important stylistic link in that both Tcherepnin and Roslavets were able to write progressive music that was distinctively Russian but that also moved on from the pervasive influence of Scriabin, whose shadow many of their contemporaries were unable to move beyond.
Roslavets is also known for his distinctive post-tonal harmonic theories, ideas that parallel Schoenberg's serialism, but without that Austro-German strictness of application. In fact, the harmonic language here is more palatable than the comparison suggests. In true Russian fashion, Roslavets is always keenly aware of the colour and relative density of his harmonies, and never lets theoretical considerations distract him from the continuity and expressive power of the music's surface level. That said, the piano parts in these works, and particularly in the sonatas are often densely textured and it is incumbent upon the cellist to retain the foreground despite the sheer volume coming from the accompaniment.On the whole Lachezar Kostov achieves this very well. He is able to put some real power behind the bow, but always lets the melodic lines sing. His tone is varied, by turns lyrical and incisive, and always pleasant whatever the dynamic.
The Cello Sonatas are the main offering here, but the extras are also interesting. 'Meditation' and 'Dances of the White Maidens' are lighter fare, as their titles suggest, and they serve to leaven the density of the main works. Then there is a transcription of a Viola Sonata (apparently numbering is a problem because it is uncertain if he wrote two or three). This too is a more lyrical work, but has moments of dramatic intensity that match the cello sonatas. Actually, it is an impressive transcription; transcribing works between the viola and the cello usually leads to mixed results, and you often end up wishing you were listening to the original version. Not here though, the arrangement and the performance present the work as if it were a cello orginal.
Until recently, Roslavets was one of the most scandalously neglected composers of the Soviet era when it came to performances and recordings. Not any more though, and this disc is up against at least two significant competitors, from cellists Boris Pergamenshikov and Alexander Ivashkin. For my money, Ivashkin (CHAN 9881) is the best of the three. He has more variety in his sound and pacing, and more intensity in his fortissimos. As much as anything else he is just more Russian about the whole thing.
Kostov has a few intonation problems in the very top register, but then who doesn't? More of an issue is the sound quality. The piano is fine, resonant and presented a spacious audio environment. But the cello has a boxy and constrained sound. It is miced to closely perhaps, but it is a shame that it does not get the same treatment as the piano. A reasonable offering from Naxos, but not a serious contender for the top spot.
Gavin Dixon