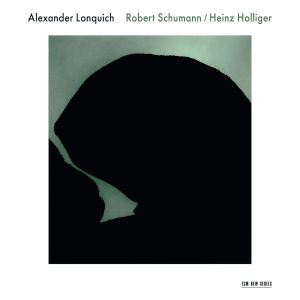 This disc is a typical triangulation of continuing ECM themes: a talented, young central European performer, a respected composer long associated with the label, and of course a cover illustration unlike anything you've ever seen before. The inclusion of Schumann may seem like a new departure, but this is not the only recent ECM disc to combine standard repertoire works with more modern fare.
The justification in this case is the influence of Schumann's piano music on the Holliger work. But despite the views of the composer himself and the author of the liner notes, the connections are far from obvious. Schumann's long, flowing melodies stand in marked contrast to the more stochastic textures of Holliger's Partita. There are connections, but they are at a much deeper level. Both composers have a curiously paradoxical relationship with the piano. It is as if neither really wants to write for the instrument and is always trying to make it sound like something else. And yet both are consummate craftsmen, who ensure that every bar they write is deeply idiomatic, so as to make the most of every musical possibility the instrument has to offer. Then there are the "Sphynxen für Sch.", explicit references to Schumann's work in Holliger's score. Schumann stated that his Sphinxes should not be played, and Holliger distances his, at least from performance at the keyboard, by having the performer reach into case to play the strings directly. The first of the two is the more effective, and here we find pianist Alexander Lonquich stroking the bass strings at the absolute minim dynamic. It is at points like this that you realise just what benefits the high quality of ECM's sound recording can bring to a project like this. I can well imagine this effect being all but obscured by lesser technology.
These Sphinxes suggest deep thematic connections connecting the movements, and certainly the overall impression is of episodes, contrasting in mood yet somehow unified at a deeper level. And this is perhaps the most significant connection to Schumann; Holliger goes to emotional extremes, a fact he makes explicit by contrasting one movement against the next. But if he is trying to convince us that his own psychological makeup is as complex and as fragile as Schumann's, the elegant sanity of the work's construction gives the game away.
Lonquich plays the original rather than the more famous revised version of Kreisleriana, although he admits that the differences are slight. His performance is lyrical and Romantic but always disciplined. The phrases are sculpted with a seemingly free rubato, but the tempo changes are always within fairly narrow limits and the metric logic of the music is never threatened. And he is not above lingering on the more beautiful moments, or driving the music on in the build up to a climax. In short, it is an ideal ECM reading of the work, and is perfectly matched by the clear yet resonant sound engineering.
Both the Schumann and the Holliger are given excellent readings here, and while the connections between the two remain nebulous, there is no doubt that listening to the Schumann is the ideal preparation for the Holliger. And if, as I suspect, Holliger's Partita appears here primarily as a justification for getting the Schumann into the ECM catalogue, then why not? Both works are well worth hearing, but it's the Schumann I'll be returning to soonest.
Gavin Dixon