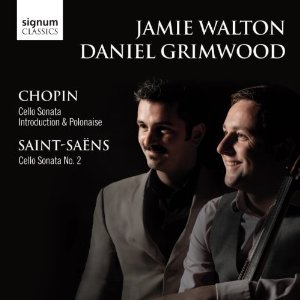 Buy from:
Chopin and Saint-Saëns don't seem like a natural pairing, but the stylistic similarities between the two sonatas presented here is startling. Both are the work of composers nearing the ends of their careers (although Chopin wasn't exactly old) and demonstrate the benefits of a lifetime's experience wrestling with generic forms. The sonatas are both grand affairs, each is in four movements, and every movement is filled with long, expansive melodies that sit well with the cello's declamatory yet expressive sound. For Romanza third movement of the Saint-Saens is a particular treat. The movement is a long, winding theme and variations, in which all thoughts of neat proportion or musical progression are suspended, allowing the cello to just sing for a full nine minutes.
The Chopin is a more famous work, so much so that it gets top billing on the cover, despite appearing second on the programme. It always surprises me that Chopin was able to keep the focus on the cello throughout the work and keep the piano in the background. In fact, both he and Saint-Saëns manage this by increasing the note density and dynamics of the cello part rather than reducing the piano's contribution. But despite its unusual (for him) instrumentation, this is classic Chopin, and deserves a place up there with the greatest of his piano works.
Jamie Walton is an interesting cellist. His style is clean, with hardly any appreciable vibrato or portamento. I'm a big fan of this sort of playing, and to find this aesthetic discipline being applied to the most Romantic of Romantic repertoire is little short of a miracle. Just listen to the clean declamation on the high phrases in the outer movements of the Chopin, that's really elegant and all the better for avoiding the big swoops between the notes that so many other cellists would apply automatically here. I also like Walton's low register, which is rich, deep and satisfying.
Daniel Grimwood holds back on the dynamics with his accompaniment, more so perhaps than is necessary. Even so, he is clearly enjoying every minute, and even though his contribution to the Chopin is strictly accompaniment, it is also piano music by Chopin, and he makes the most of the deeply idiomatic writing.
I've reservations about the recording quality. The sessions took place at the Wyastone Concert Hall at the Nimbus Estate on the Welsh borders. The hall is quite resonant, especially given that its primary use is as a recording venue, but the results are usually more even than here. The microphones have been positioned some distance from the performers, perhaps to make the most of the acoustic, but both of them, and the cello in particular, sound frustratingly distant. The dynamic range of the players is wide, but is also exaggerated by the recording, so avoid the temptation to turn up the quieter passages because you'll get a shock at the next fortissimo.
But those reservations apart, this is an enjoyable disc. According to the liner note bio, Jamie Walton is "becoming increasingly renowned for his purity of tone", a description I would happily endorse. I notice he has a number of other recordings out on the Signum label, mostly of 19th century repertoire. I'd imagine that Greig and Rachmaninov would benefit just as much as Chopin and Saëns from this focussed, disciplined approach. I'd love to hear what he does with Bach as well.
Gavin Dixon
Read the liner note at: http://www.signumrecords.com/catalogue/sigcd252/252Booklet_web.pdf