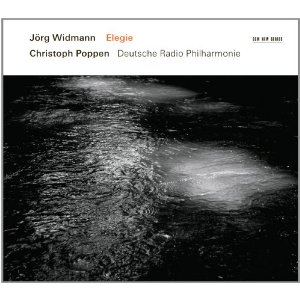 Buy from:
Jörg Widmann is a man of many musical talents, not least of which, at least on the strength of this album, is orchestration. He has a sensibility to the timbral and dramatic possibilities of the ensemble that seems almost anachronistic, a relic from the days of Mahler and Strauss. And like Mahler (perhaps less like Strauss), his orchestration is surprisingly sparing, so that even in the louder passages, each of the instruments is employed for a specific purpose, giving the music a valuable, and these days all too rare, sense of purpose and logic.
Engagement with religious themes is another unusual strand of Widmann's work, although that engagement in Messe is abstract to say the least. The work starts from the idea of a mass setting without voices for orchestra. If this sounds a lot like the thinking behind Schnittke's 2nd Symphony, there are a lot of similarities in the music too. Both Schnittke and Widmann acknowledge the vocal origins of their ideas by spinning out orchestral textures based on simple, singable melodic lines. The textures in both cases often build up into terrifying climaxes, but there is always a sense of familiarity in the vocally-inspired melodic lines. The big difference however is that, while Schnittke uses Gregorian chant for his melodic material, Widmann either buries those associations so deep they are not recognisable or (more likely) makes up his own melodic lines. That is an important distinction because it breaks the specific semantic link with liturgical music. However, there is plenty of rhetoric here, including distant chorales from muted strings, brass fanfares, the associative sounds of various kinds of bells. In short, it is obviously meant to mean something quite specific, and it is clearly something to do with religious faith, but it is up to the listener to decide for themselves exactly what that meaning might be.
Fünf Bruchstücke for clarinet and piano is equally enigmatic, although the use of extended performance techniques on the clarinet gives a much greater sense of immediacy. Widmann performs the solo line himself, and has engaged the services of a distinguished musician as accompanist: Heinz Holliger in his first recording as a pianist. Like Holliger's oboe music, Widmann's writing for the clarinet really benefits from the fact that the composer is a virtuoso performer on the instrument. He knows exactly what it can do, or rather what he can do on it. I don't think there are any extended techniques here that I have not heard before, we are talking about growls, slides, microtones, keyslaps etc., but the way in which he combines them, either together or in quick succession, speaks of an affinity with the clarinet that only a player could bring. For the first few pieces, it seems he is giving Holliger an easy time of it, but then the piano part really takes off, and Holliger proves that he is more than up to the challenge. There is a nice effect in the piano part, where empty CD cases are laid across the strings to mirror some of the more unworldly sounds coming out of the clarinet.
Unworldly is a term that could equally apply to Elegie, a concertante work for clarinet and orchestra. The parallels between the first track and this are undeniable, both have a bleak psychological outlook, but here it is as if the spiritual framework of religion has been removed, taking with it the music's structural stability as well. The result is an almost rhapsodic interplay of extended techniques on the clarinet and small orchestral ensembles. There is a free reed instrument of some sort in there, an accordion perhaps, that adds a strange kind of halo to many of the textures. Given the lack of form in this piece, I'm not sure how it would stand up in a concert, but as an epilogue to this programme it is ideal.
Widmann is clearly a composer for our times, although from this side of the channel his musical priorities seem more Teutonic even than those of most of his compatriots. A British composer would struggle to get audiences to take this sort of music seriously without adding a good dose of post-modern irony or stylistic cross-reference. Widmann instead continues where the Second Viennese School left off, searching for new sounds and modes of expression, but all the time maintaining a faith in the symphonic ideals by which a work can be justified purely in terms of its innovation, scale and level of abstraction. That aesthetic idealism fits snugly into the ECM corporate image, and it is to both their credit and his that the production standards here are as good as any from ECM. The Deutsche Radio Philharmonie have no problems at all with Widmann's unusual scores and the sound quality is excellent. Widmann, of course, gives exemplary performances of his own solo parts. He is clearly one to watch, and for those wanting to get themselves up to speed with this new music phenomenon, this disc is as good an introduction as any to his distinctive soundworld.
Gavin Dixon