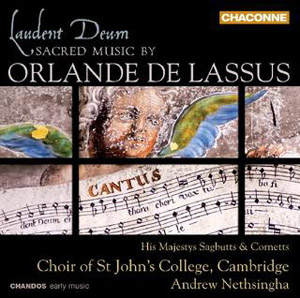 Buy/Download from:
This disc is a real treat for fans of Renaissance polyphony. Lassus could probably be placed somewhere in the top five 16th century composers, but in a period dominated by the monolithic choral textures of Palestrina, the sheer variety of Lassus' works marks him out as something special. It is difficult to pin down the logic behind the programming on this disc, but if it is intended to demonstrate the breadth and uniformly high quality of Lassus' work, it is an unqualified success. We have works in four parts, in six parts, both secular and choral, and a good number of pieces performed on Renaissance brass, where they work just as well.
Of the 24 tracks, 14 claim to be première recordings, which given that Lassus is hardly a stranger to the CD catalogues suggests an unusually extensive output. And the quality never falters. Jeremy Summerly makes the point in his informative liner notes that the performance of Lassus' music on instrumental consorts is not only fully justified by contemporary documents, but is also a demonstration of the rock-solid compositional technique that underpins this music, never needing the semantics of a text or a specific liturgical function to achieve its effect.
There is even harmonic innovation here. Listen, for example, to the opening of Timor et timor, where the 'Fearfulness and trembling' are represented by dark minorish modal harmonies, with startling harmonic shifts between each syllable. Palestrina might be a little more subtle with this sort of thing, but the sheer immediacy of Lassus' approach achieves something different and equally startling, a balance of the transcendental and the worldly.
This sense of immediacy is all the more powerful for the Choir of St John's College and their ability to perform this music with analytical precision, yet without ever weighing down its soaring lines. The clarity of their pronunciation helps to articulate the textures; there is never any sense that the consonants have been rounded off for the sake of the melodic contours. On the contrary, the clear and precisely differentiated consonants both structure the vocal lines and ensure that the texts (which are also surprisingly varied) are never subordinated to the musical texture.
The acoustic – of St. John's College Chapel of course – is warm but not unduly resonant. In fact, it has a very distinctive presence in recording, and naturally this choir knows exactly how to make the most of it. The sound engineering also achieves the ideal balance of choir and aura, and indeed of individual singers and ensemble. This last is no mean feat, given the range of different choral forces employed, from three singers right up to the full choir of about 25, and with everything in between. The instrumental contribution, from His Majestys Sagbutts and Cornetts with the some unusual woodwind additions – bass rackett for example – increase further the musical variety of offer. But when the instruments are used to support the choir, the arrangements always ensure that the choir dominates. That is as it should be, of course, but I'd love to have heard a bit more bass rackett.
In general though, this is an excellent selection of music from Lassus, and is presented with real musical imagination, yet without ever diverting from either the spirit or letter of the composer's scores. It would be hard to argue that Lassus has suffered undue neglect in modern times, so the chances are that if you've an interest in 16th century choral music you'll have heard him before. Even so, you won't have heard most of the works on this disc, which are all up their with his finest, and which are given here in performances that show off this fascinating and diverse composer in the best possible light.
Gavin Dixon