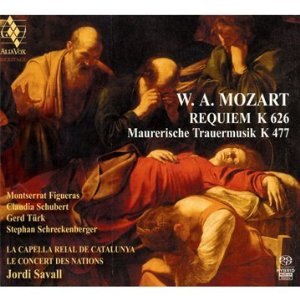 Buy from:
The repertoire choices here seem curiously conservative, considering the course of Jordi Savall's career in recent years. The answer to that conundrum lies in the date of recording – 1991. Back then, Savall was a much more mainstream kind of period performance performer, so a disc of Mozart's Requiem would have seemed like a logical choice for him, especially given that the year marked the bicentenary of the composer's death.
Even back then he was a radical, and what makes this recording prophetic is the relaxed way that the period performance conventions are applied. In the early 90s, there was still a lingering sense of academic earnestness about most period instrument performance, but Jordi Savall demonstrates the value of a light touch, which has since more or less become the convention. In the context of the Mozart Requiem, that sits uneasily with the gravity of the subject, although it serves to highlight the Classical elegance that is never far from the surface in Mozart's music. There are no super-fast tempos here, at least by period performance standards, the Rex tremendae is the only movement that seems a shade faster than comfortable. Subtle dynamics rather than rubato are used to shape the soloists phrases, and despite the almost playful atmosphere, closer listening reveals an impressive discipline in the tempos, balance and ornamentation.
The soloists are all up to the job although none stands out. Singing at 430hz gives the ladies a little more room for manoeuvre in the upper register. The gentlemen are both occasionally insecure in their tuning, and a bit more gravity from bass Stephan Schreckenberger would have been welcomed, especially in the Tuba mirum.
The trombone soloist is as much to blame as the bass here though. The singsong approach in the famous trombone solo seems wholly at odds with the spirit of the work, although considering Savall's other recordings, it is a fair bet that he requested the style of playing specifically.
On the whole, the orchestra are more impressive than the choir, and putting the Masonic Funeral Music at the start of the disc gives them an excellent chance to show of their complex tone colours. Savall makes a big thing out of the fact that period basset horns are used. They are prominent in the opening, but after that you have to listen for them. They do add a wonderful earthy colour to the middle register of the woodwinds. There is some nice raspy playing from the brass (although some of their fortes could be better controlled), and the timpani sound suitably archaic. The strings seem a little underpowered, I don't know what the conventions of the time were, but two to a part strikes me as stingy. The choir is also small, and their tone colour isn't particularly interesting. They sing with excellent precision though, and the clarity of their lines in the contrapuntal movements is beyond reproach.
Given that this is an SACD, you could justifiably expect more from the recorded sound. But then, it is technically an SACD reissue, which muddies the waters a little. The recording was made in a church in Alsace, and the microphones seem to have been placed well back to make the most of the acoustic. That is a gamble you can take when you've got such a small ensemble, and it creates a distinctive sound stage; it is not often you hear choral music by Mozart recorded in a church on period instruments. However, the recording shows its age, and an SACD produced under similar circumstances today would undoubtedly be clearer in the details and more engaging in the bigger picture.
This disc is going to appeal to fans of Jordi Savall more than to fans of Mozart, I suspect. It is an elegant reissue though, and probably the best product you could create from the masters in question. It is one of a large collection of Jordi Savall reissues, and most of the liner is devoted to cataloguing the others. But there are also some facsimile pages from the score, an essay from Savall himself, and every member of the choir and orchestra are named. The completion is by Sussmayer, which is more implied than stated in the notes. It might have been nice to have made that fact crystal clear on the box, especially since Jordi Savall is not above writing completions or elaborations of historical works himself.
Gavin Dixon