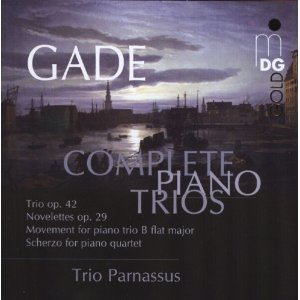 The word 'Complete' has never seemed less appropriate in the title of a CD. The programme may include every work that Niels Gade wrote for piano trio, but the number of these projects that actually made it through to a complete form is surprisingly low. There is the Op.42 Piano Trio, which holds together well enough. Then there are the 'Novelettes' Op.29, a work that seems to aspire to the coherency of a classical piano trio, and that the composer had a few goes at reorganising to that effect, but without any real success. The rest of the programme is made up of orphaned movements, either discards or remnants of projects that never got any further.
Not that issues of overall structure should spoil our enjoyment of the individual movements, which for the most part hold together very well. There is nothing very radical about the style of this music, for the most part we are talking about elegant, although rarely memorable melodies, supported by idiomatic but unadventurous accompanying figures. The internal structure of movements tends to be articulated by minor changes of tempo and dynamic, so there are few extreme contrasts, and the passion beneath this music, such as it is, is always very much tempered.
Gade was from Denmark, and the accepted wisdom is that his early music is in a Nordic vein, which he turned away from when he went to study in Leipzig, a town then dominated by the musical presence of Mendelssohn. But these trios tell a different story. The First Movement for a Piano Trio, which was written in 1839 pre-dates his trip to Saxony, yet is the most Mendelssohn-influenced of the lot. It is perhaps unfair to describe it as a second rate knock off of Mendelssohn's own piano trios, and anyway, the Mendelssohn works are so great, that even a pale imitation like this still has the potential to be great music.
The visit to Leipzig may have cured Gade of some of his adoration for Mendelssohn, but that was soon to be replaced by a similar devotion to Schumann. The result, for most of the other works on this disc, is a style that flits between the two composers. The Op.42 Trio demonstrates how Schumann's influence had the effect of making Gade's chamber music more sophisticated and more texturally dense. The Novelettes also display this increased textural richness and a little more adventurousness with the shape and proportions of the melodic lines. The Scherzo for Piano Quartet is the earliest work on the disc, dating from 1836, and is very much juvenilia, its textures the simplest of any of the works (despite the added viola) and the thematic material the least developed.
The Trio Parnassus are an adventurous group when it comes to programming, and this disc follows similar forays into the neglected trios of Korngold and Reger. The performances are committed and lyrical. There are occasional tuning problems between the violin and cello, but the balance is good and the ensemble is excellent. The recorded sound is very round, adding to the coherence of the sound, but obscuring the finer details, especially of the piano sound. It seems like the microphones have been placed well back, and while the resulting sound is certainly warm, it lacks any real sense of intimacy.
Or perhaps the recording engineers are doing the composer a favour. The soundworld of this music sits somewhere between he Classical and the Romantic, and it often seems that the composer is unsure himself about how much Romantic abandon he can risk in these otherwise quite formal structures. Trio Parnassus go someway towards encouraging him into the 19th century proper with their often expansive and always melodic readings. But by presenting the music in the same audio environment as they previously have Korngold and Reger, MDG take that final step on the composer's behalf.
Gavin Dixon