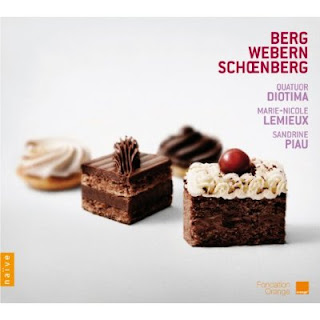 Programmes that seek to draw stylistic connections between the members of the Second Viennese School always seem to end up doing the exact opposite. Quatuor Diotima take the approach with this CD of combining the works by the three composers for string quartet and voice. But that's where the similarities between them end. It is a good excuse for a recording of Schoenberg's 2nd Quartet and Berg's Lyric Suite (here with the alto singing the 1st violin part as per a score annotated by Berg but only discovered in 1977). Great as these two works are, they seem (to me at least) to come from different worlds. The Webern Op.9 Bagatelles are sandwiched between and have an additional 7th bagatelle appended. This work, for quartet and mezzo was apparently suppressed by the composer, although it is difficult to say why. There is nothing particularly deficient about it, and even if you don't get on with it, it only lasts a minute.
Any stylistic disparities in the programming are countered by the performers' uniformly austere approach. The Schoenberg has been recorded so many times that listeners can take their pick from a broad spectrum from the broad Romantic readings at one end, through the Expressionist middle ground to the hard-edge Modernists, who generally speaking seem to be in the minority. However, that is exactly where this recording sits. The quartet's sound is dry and vibrato-less, and they project an earnest sense of purpose throughout. This really works in some places. I love the opening, where they seem to land running and get straight into the action. It can get a bit wearing though, and a little warmth here or there wouldn't go amiss.
This austerity is much better suited to the Berg and Webern, both of which come off well. The players have an attention to the smallest details, which can be considered a bonus in the performance of most of the string quartet repertoire, but which is absolutely essential here. They also bring a sense of perspective, which allows them to pace the music well and not congest the denser passages. Even Webern's minute-long movements require a feeling for overall structure, and Quatuor Diotima get the balance just right between logical progression and living in the moment.
The two singers, soprano Sandrine Piau and Marie-Nicole Lemieux, are a little more florid than the quartet. Both sing with significant vibrato, which isn't excessive but certainly stands out against the strings. They bring a humanising influence to the music which is always very welcome, and Lemieux's contribution to the Lyric Suite is sufficiently impressive to justify the choice of this unusual performing version.
The recording quality is satisfactory, but not exceptional. Given the attention to detail from the players, it is a shame that the engineering doesn't let us get right into the middle of the action. Instead, the quartet and the singers are presented as a single unit, admirably unified but lacking intimacy and definition in the individual instruments.
This recording presents the Second Viennese School as unflinching Modernists without any back story or associations with the Romanticism of the previous generation. Many listeners will agree with that model, and they will probably get the most out of this recording. But those who want to hear Brahms in their Schoenberg and Zemlinsky in their Webern should probably look elsewhere.
Gavin Dixon