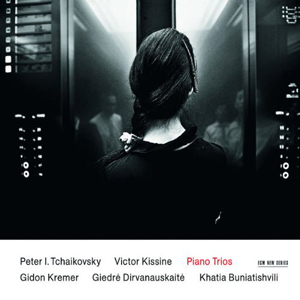 
Why does Russia have such a problem with chamber music? The rationale behind the programme on this disc is that the two works represent the beginning and the end of the piano trio as a genre for Russian composition, and that the history of the genre acted against both composers. But is chamber music really a German imposition that is at odds with the spirit of Russian music? Shostakovich didn't think so, although one of his motivations for writing string quartets was the paucity of Russian examples.
Victor Kissine obviously feels these tensions, and does his best to illustrate them in his piano trio "Zerkalo" (Mirror). His biography in the liner mentions collaboration with Schnittke, and like Schnittke, Kissine plays out his own struggles with musical tradition in his music. To adapt Schnittke's phrase, this piano trio is a work about the impossibility of writing piano trios. What that means in practise is that the work is based on gestures one might associate with chamber music - short motivic expositions, dialogue between the instruments, surprise fortissimo interjections – but the contexts in which these are heard has a distinctly alienating effect. At the opening, these small gestures are separated by silences, and as the textures build up, they gradually string together into some kind of logic, but not clear formal logic by any means.
The composer describes the form, with reference to the work's title, as a 'shadow of sonata form', but it is difficult to link anything in it to a traditional sonata allegro. Perhaps what he means is that the musical ideas are obliged to interact, but by avoiding any sense of agreement or reconciliation, they merely outline the shape of the form rather than playing out its musical ramifications. A more useful handle on the work is the source of the title. It is taken from the lines: The mirror dreams only of the mirror/Silence watches over silence...The poet is Anna Akhmatova. Many have tried, and most have failed, to set Akhmatova's words successfully to music, but Kissine's (admittedly purely instrumental) strains fit the bill better than most. Like Akhmatova's work, his music is based on brief aphorisms, whose chief virtue is economy of means. And both the poet and the composer link together these short statements into longer works based on some complex and inscrutable logic. Kissine seems to have buttressed his work against the German heritage of the genre with the help of a truly Russian writer.
Tchaikovsky sidestepped the prevalent German models for piano trio composition by instead writing a symphony and scoring it for three players. He already had experience of how to prevent a symphony from sounding German, so it was a sensible move. Gidon Kremer and his colleagues don't stress the symphonic angle too much. The reading is certainly expansive, but the amount of breadth they allow the individual phrases means that the work loses some of its urgency. In places, it tends towards the sound world of Victor Kissine, where strident gestures appear then disappear, but without any discernible effect on the neighbouring music. That said, the work's major climaxes are beautifully prepared and executed with both power and control, allowing them to anchor the work's structure and prevent it from losing direction.
It hardly needs stating that the performances are technically perfect. As with any Gidon Kremer project, the communication between the players is of the highest standard, meaning that phrases begin and end exactly together, and any rubato along the way (there is quite a bit in the Tchaikovsky) is precisely synchronised.
Resonant recording spaces have been a trademark of ECM chamber recordings for a long time, but this goes a step further than most. We are in the Himmelfahrtskirche in Munich, a space that most recording engineers would only consider for large choirs. The decay is long but clean, and has surprisingly little effect on the detail of the sound. The atmosphere created is ideal for the Kissine, creating an aura around the isolated phrases and gestures, and further distancing the work from the 'traditional chamber music sound'. Its role in the Tchaikovsky is similarly alienating, not distracting as such but not really necessary for this music either. Kremer and his colleagues deliver an excellent performance of this popular work, but it is only one of many excellent performances in the catalogue. So if nothing else, the acoustic allows them to stand out from the crowd.
Gavin Dixon