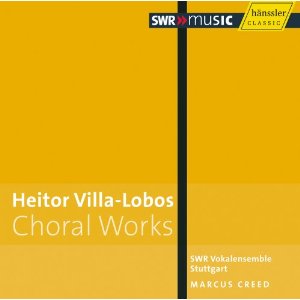 Villa-Lobos spent a large proportion of his career in Brazil involved in music education and in particular instructing teachers in choral conducting. On the evidence of this disc of unaccompanied choral works, he certainly knew how choirs work. The music here is impressively varied, but uniformly well written for choir. It sounds as if it is fairly easy to sing (although that may be an illusion) but the sheer variety of sounds, textures and rhythms that the composer draws from the choir is incredible. The lack of accompanying instruments does nothing to reduce the musical variety or credibility of the music, and the sheer competency of the choir means that they never need assistance in maintaining the pitch or mood.
The most famous works here are those linked to Bach, the Bachianas Brasileiras No.9 (better known in the composer's arrangement for strings) and the arrangement for choir of the 8th Fugue from the 48. The quantity of counterpoint in these two works sets them apart from the more homophonic textures of the other music, and occasionally suggests the Swingle Singers. Of course, the choir is significantly larger, but the unity of ensemble and intonation is on a par with the Swingle Singers' always impressive standards.
Other works bring the Brazilian flavour closer to the surface, like José and As Costureiras, both based on folk songs, and Choros No.3, which is based on Brazilian dance rhythms. Even when Villa-Lobos turns his attentions to sacred material, such as in Preces sem palavras and his early Ave Maria setting, there is still a strong South American flavour that distances the music from European models.
So repertoire-wise, the disc achieves an impressive balance of variety of mood and stylistic unity. The performances are impressive, although anybody with suspicions that a German radio choir will struggle to capture the Brazilian flavour of the music may have a point. Given the ebullient approach we associate with the performance of classical music in South America these days, the more straight laced approach here could be considered a bit stuffy. But then, the composer prided himself on the links between Brazilian and European traditions in his music, so a European approach to its performance surely has some validity.
>And technically the singing is beyond reproach. The sheer control that the singers exercise over their tone, ensemble and dynamic balance is as good as you could ask for. Listen, for example, to the slow, evenly graduated fade out at the end of the first movement of Bendita Sabedoria, an atmospheric effect that only works because of the sheer precision of the performance.
I can't find any information about where this recording was made, but I'm assuming it was in a studio. The sound is warm and the recorded sound of the choir is always attractive. The few overtly contrapuntal movements are a little lacking in clarity in the middle voices, but the majority of the movements are based on simpler textures, and these come across fine.
A fun disc then, and one that is sure to appeal to Villa-Lobos fans. To everybody else, it is worth looking out for simply for the rare combination that it offers of upbeat choral music that is never trivial and that is sung throughout with real commitment.
Gavin Dixon