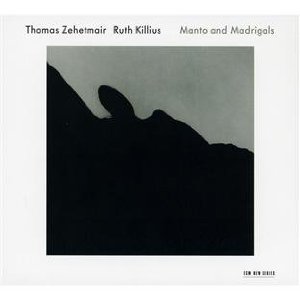 Thomas Zehetmair and Ruth Killius offer an unusual and satisfyingly diverse programme of violin and viola duets on this album. Bartók is the earliest composer represented, and in a sense, everything else on the programme follows on from Bartók's work. The spirit of folk fiddling, especially in the traditions of Central Europe is reflected one way or another in many of the works. And yet this is, for the most part, a rigorously Modernist selection. The relationship between Modernism and the folk idioms that regularly surface is a continuing source of stylistic tension, and while Bartók found some clever solutions to that paradox, the other composers here each chose to address the problem in their own way.
Manto by Giacinto Scelsi is made up of long, often overlapping pitches, with a few interludes of more frenetic activity, and some judiciously added singing episodes by the players. It really sets the tone for what is to come. The microphones are placed quite close to the two players, who both perform with an earthy tone. That gives a real sense of the physical presence of the instruments, giving a welcome sense of intimacy, but also grounding the music, so that any later transcendence must be hard won.
Heinz Holliger comes closest with the first of his Drei Skizzen. The piece is all up in the artificial harmonics, an eerie, crystalline effect. It sounds like tricky music to play, but both of these performers are clearly well up to the task. The Bartók that follows is a curiosity. The score is a single page (reproduced in the liner) which one player plays from the top left, while the other turns the page over and plays the music upside down. The sheer tonality of this short work stands out from what has gone before, but there is something clever going on here. The major work at the end of the programme is the Three Madrigals by Martinů, a tonal, or at least modal work, which is also stylistically at odds with the more Modernist fare earlier on. But the performers gradually introduce the more traditional idiom in the runup to these Madrigals, first with the Bartók and later with Madhouse Air by Peter Maxwell Davis, in which a folk tune struggles to emerge from more dissociated textures, not a masterpiece by any means, but the ideal work for this juncture of the programme.
The other pieces, by Rainer Killius, Nikos Skalkottas and Johannes Nied all have their merits, but don't stand up to comparison with the Scelsi and Holliger, which are easily the most impressive works on the disc. But everything here is of interest, and every piece is distinctive. There are clear influences which help to contextualise much of the music, the Holliger often sounds like Ligeti, and the Skalkottas is only a few steps removed from the string writing of Bartók.
The performances are great, and there is an openness to the style of performance which prevents any of this from sounding like 'difficult' new music. It is a high concept album, you'd expect nothing less from ECM, but it is difficult to pin down exactly what the concept is. Hommage a Bartók perhaps, or just an engaging pet project from Zehetmair and Killius. It is well recorded and well packaged – another quality release from ECM, and an unusual one, even by their standards.
Gavin Dixon