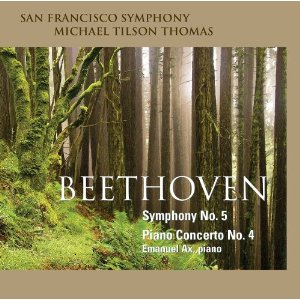 Buy from:
First impressions of this new disc from the San Francisco Symphony are of the sheer quality of the production values. The orchestra, especially under the leadership of Michael Tilson Thomas, has a legitimate claim to a place in the pantheon of the world's great orchestras, so their own label ought to be showing off some impressive strengths. And that is exactly what happens here. The sparkling SACD audio does full justice to every section: the woodwinds are chirpy and distinct, the horns are brazen, the lower strings are given presence and weight by the strong bass response.
But great as the orchestra and their esteemed conductor undoubtedly are, the best reason to buy this disc is the contribution from pianist Emanuel Ax. There are no shortage of recordings of Beethoven's Fourth Piano Concerto, and even among the SACDs, there have been two other strong recent contenders, from Dejan Lazić and Yevgeny Sudbin. Ax is easily the equal of both of these, and is perhaps closer to Sudbin in his interpretation. Like Sudbin, he is able to combine muscular pianism with a lyrical melodic style, although he leans more towards the weight than the lyricism. He arpeggiates the opening chord, in accordance with Beethoven's verbally stated, although never written, wishes. From then on his performance is all about immediacy and agility. It is heavy, but then that is what the work requires. There is lots of pedal, and the acoustic of the concert hall also blurs the edges. A little more detail might have been nice, especially since the SACD audio would be more than capable of picking it up. But this interpretation is more about the bigger picture, and Emanuel Ax is more interested in whipping up a whirlwind than pondering over the minute details of the score.
Michael Tilson Thomas approaches the Fifth Symphony in a similar spirit. Any thought of period performance is out of the window, and instead we get a turbulent, in-your-face reading that pushes the drama, especially of the outside movements for all it is worth. But it doesn't quite hit the mark. The tempos are often slow and rarely have the flexibility the music requires. And where Carlos Kleiber (to make an unfair comparison) builds the intensity through carefully graded crescendos and slight tempo increases, MTT is more inclined to slow down for the monumental climaxes. A legitimate approach, but not half as engaging or exciting as it could be.
The orchestra are on top form throughout. Despite the size of the string section, they never hold the music back and their ensemble is as good as any. The horns are wonderfully raspy in the second movement of the symphony, as are the trumpets in the fourth.
So if you are thinking of buying this for the concerto, do so. I have reservations about the symphony, but I have at least three recordings of the work that are worse, and most other collectors probably do too. And whatever MTT is doing on the podium, he couldn't ask for a better response from his orchestra. They sound great throughout, and the audio puts them in the best possible light. Would that all orchestra own labels matched the quality of SFS Media.
Gavin Dixon
This review first appeared at MusicWeb International:
http://www.musicweb-international.com/classrev/2011/May11/Beethoven_821936-0037-2.htm