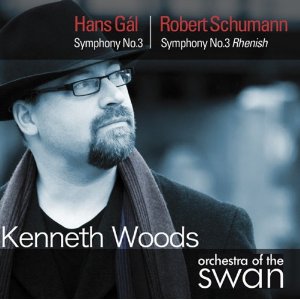 Each successive release of Hans Gál's orchestral music fits another piece into the jigsaw, and yet his musical persona remains as difficult as ever to define. This Third and final symphony [correction, there is a Fourth, see postscript] was written in 1951-2. It is complex but conservative, modestly-scaled but expansive in scope, rigorously Austro-German but also rule-breaking at every turn. There is a curious dichotomy between the sophistication of the orchestral textures and the staid harmonic language, creating a listening experience that is always interesting despite lacking emotional turbulence.
It is tempting to hear British influence in this music, written by an Austrian émigré living in Edinburgh. Elgar in particular is a voice that seems to be hidden somewhere behind many of the textures. But no, I think it is rather the case that Elgar and his successors were writing in a style that was heavily influenced Brahms and his Viennese contemporaries, as was Gál, whatever country he happened to reside in at the time.
The Third Symphony is written for a relatively small ensemble, but it makes the most of the limited orchestral resources, giving every player a real workout. The young players of the Orchestra of the Swan respond well to the many challenges the score presents. One or two of them, I'm thinking of the oboe, flute, clarinet and horn soloists in particular, seem to be playing exposed lines almost throughout, and all rise to the challenge magnificently.
There is an endearing sense of nativity to the music, and I can't decide if this is the result of the composition or the performance. Gál's post-Brahmsian orchestration and counterpoint have a certain matter-of-fact quality, especially in the absence of any meaningful transient dissonance, which Kenneth Woods amplifies by maintaining fairly strict tempos throughout. That's not to say the performance is in any way rigid, but rather when the score provides opportunities to linger, discipline is always maintained and the performance moves on. The only place where this discipline feels excessive is the opening passage of the second movement. This is marked Andante tranquillo e placido, which surely gives license for a little more indulgence. But then, Woods knows that his woodwind soloists can give him all the emotion the music needs, without him having to pull the tempos around, and they more than repay his trust.
We are told on the cover that this is the world première recording of the symphony, but according to the liner note, a recording was made in 1954 under the composer's baton. It probably wasn't a commercial recording, which may explain the disparity, but I'd be fascinated to know if it still exists, and to what extent Kenneth Woods has based his own interpretation on it. Of course, this sort of music gives scope for a wide range of interpretations, and he would be fully justified in completely ignoring the composer's recording, but great as this recording is, another view of this score would certainly be a valuable asset.
The coupling of Schumann's Third may seem like an opportunistic commercial move, but the logic is impeccable. Gál was, after all, the author of a book on Schumann's orchestral music, and the stylistic legacies are crystal clear. The comparison does make Gál seem a little more 'academic' than he might otherwise, remaining loyal to the intellectual thematic structuring of the German 19th century symphonic tradition without quite managing the free spirit of its greatest masters. But any excuse for a new recording of the Rhenish is to be welcomed, and this one isn't bad at all.
The players give an enthusiastic but focussed performance that works best in the inner movements. Here we find some really sensitive ensemble playing and a wonderful elegance of tone from every section. I was particularly impressed by the trombones at the start of the fourth movement. The astronomical register of the alto part here daunts most players, who are happy to be able to get the notes out at all. So to hear it played with this apparent ease and, most importantly, serene elegance is a real pleasure.
If this Rhenish is a level beneath the greatest on record, it is because of the ensemble in the outer movements. In the first movement in particular, the sheer enthusiasm of the players occasionally threatens the unity of the ensemble. It's not a big problem though, and anyway, the Schumann is only a bonus on this disc, which is well worth buying simply for the Gál symphony.
Gavin Dixon
To find out more about Hans Gál, please visit the website of the Hans Gál Society: http://www.hansgalsociety.org/

Postscript
Kenneth Woods has contacted me with a correction and an addition. Hans Gál did, in fact, write a Fourth Symphony, which Woods will be taking into the studio next December. It is a concertante work for violin, cello, flute and clarinet, so there should be plenty of scope for the Orchestra of the Swan's principals to show off thier considerable talents. Also, he tells me that he has had access to Gál's own recording of the Third Symphony. Neither the orchestral playing nor the sound quality are good enough to merit commercial release. With regard to tempos, Gál has a habit of easing into tempos, and then taking things slower than the metronome marks in the final score. This may be a concession to the orchestra, or the metronome markings may be the result of later editing. Whichever way, Woods is surely right to trust the score over the apperently questionable recording.