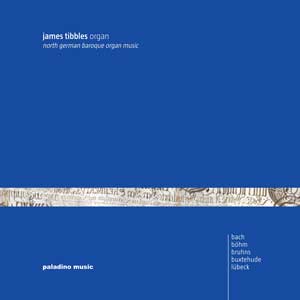 James Tibbles is the best kind of scholar/performer. His playing is based on rigorous research into the organology and performance practice associated with his repertoire, but he is not one to bore you with the details, and he is just as interested in producing lively and entertaining performances. This disc focusses on North German Baroque repertoire up to, and including, Bach. And while there are a lot of questions that could be considered at length about the appropriate way to perform this music, Tibbles satisfies himself with a few pages of salient facts in the liner notes, outlining his approach, the reasons for his choice of repertoire and the reasons for his choice of instrument.
In fact the instrument is the defining factor here. Tibbles' last recording was made on an antipodean copy of a North German instrument, a NZ harpsichord after the elaborate Christian Zell instrument in Hamburg (see my review here). This recording follows a similar pattern, being recorded on the organ by Jürgen Ahrend at Monash University in Melbourne. The organ is modelled on surviving baroque instruments in the Hamburg area, so Tibbles has put together a programme appropriate to its design.
And what a great programme it is. He manages, somehow, to avoid the problem that almost always besets "Bach and his contemporaries" programmes, namely that the contributions from JSB usually completely overshadow those from the other composers. But the Bach works here, a Toccata in G BWV916 and An Wasserflüssen Babylon BWV653b, fit almost seamlessly into the programme, and without doing the great man any serious injustice. The two works are chosen for their stylistic links with the North German tradition, the Toccata has generic links with toccatas by other composers in the area, while An Wasserflüssen Babylon fits into an established tradition there of improvisatory works on that chorale. Most of the other works on the programme are fairly grand, not to say loud, offerings, but there is plenty of variety too. The Buxtehude Te Deum Laudamus and Preludium in d minor find the composer at the top of his game. The two works by Vincent Lübeck make up a significant proportion of the dismally small number of his composition that have survived. His Nun laßt uns Gott, dem Herren chorale variations offer some of the greatest variety on the disc, with the quieter textures giving Tibbles a chance to show off the organ's surprisingly subtle tremulant. Georg Böhm is another composer who is well known to organists, but whose run-of-the-mill reputation seems unjust when his work is performed to this standard. His Vater unser im Himmelreich chorale prelude is a particular treat, adding in some French colour that was apparently all the rage in 18th century Hamburg.
Tibbles claims that the mechanical action of the organ allows for a much greater sensitivity with the articulation of notes and phrases, and certainly the care and detail that go into his phrasing bear this out. In general, he is quite modest with his ornaments, and very subtle with his rubato. But both are there, and both help bring these works to life.
The sound of the organ is very clean, leading me to wonder if German organs in the 17th and 18th centuries could possibly have worked this well. There is not reason why they shouldn't I suppose. However, it is very clear that this instrument is not in a church, which does raise certain authenticity issues. I'm not complaining though, I find this bold, clean audio presentation very attractive. And it is, no doubt, the result of deliberate choices on the part of the engineer and of Tibbles himself. The microphones seem to have been placed close enough to avoid too much reverberation, but not so close that the action is audible or the balance is distorted. I notice the engineer on this recording is Thomas Grubb, a man trusted by Australian organists the world over, who shows here that he knows exactly what he is doing.
All round then, an impressive recording. With his inventive programming, Tibbles shows us that Bach is not the only game in town when it comes to Baroque organ music of North Germany, nor that his predecessors need necessarily be though of as also-rans. He also makes an interesting point in his choice of instrument. There are many Australian and New Zealand organists out there these days, putting out a good number of recordings. But most go to Northern continental Europe to find an instrument they think worthy of their various projects. Tibbles shows there are advantages to be had in working a little closer to home.
Gavin Dixon