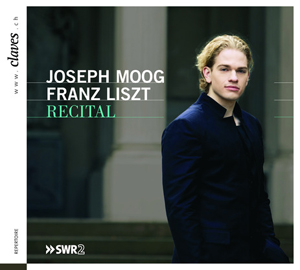 This disc of Liszt compositions and transcriptions fully deserves the title 'recital'. The sheer variety of works here is spectacular, from the grand opener, Hexameron, through various arrangements and stylistic homages to fellow composers, right up to the Bach Prelude and Fugue transcription that forms the majestic conclusion to the programme. Listening to this wide variety of styles gives a glimpse of what a recital by Liszt himself must have been like, with every work stylistically distinct, yet each moulded in Liszt's own image.
That puts some huge requirements on the pianist, Joseph Moog, whose stylistic sensitivities must be two-fold, taking in both the Liszt himself and the other composers he references, be it Beethoven, Chopin or Bach. The issue is particularly acute in the case of the opening work, the Hexameron – Grandes variations de bravoure sur la Marche des Puritans de Bellini. The work is a portmanteau, with contributions from a range of pianists: Thalberg, Pixis, Herz, Czerny and, remarkably, Chopin. The thread that weaves these diverse contributions together is not the theme itself, but Liszt, who edits the variations together for his own unique performance style. The piece isn't played much today, and the liner notes make excuses for the vacuous virtuosity of many of the variations. In fact, they needn't, because despite the multiple authors, the whole work, even the Chopin variation, sounds like vintage Liszt. Of course, it needs a performance that can do justice to both the technical virtuosity and the stylistic diversity, and that is exactly what it gets here.
The First Polonaise, and later the Second Ballade, also find Liszt in a Chopinesque mood, and to Moog's credit, he manages to find the ideal balance between the performance styles appropriate to the two composers. So the melodies flow as in Chopin, but the left hand accompaniments are quite regimented and picked out in precise detail. Elsewhere, Liszt turns his attentions to Schubert and Beethoven. In these works, Liszt's compositional style comes much more to the fore, he was hardly a historicist after all. A transcription of Bach's Prelude and Fugue BWV545 completes the programme, and here we get a glimpse of Bach as perceived in the Romantic era.
Or rather, Joseph Moog offers his interpretation of what Bach may have sounded like in the Romantic era. After all, Liszt's only contribution here is to integrate the pedal part into the left hand. But what a great excuse for some unreconstructed Romantic Bach! And Moog really makes the most of it, providing a thundering conclusion to his recital.
Joseph Moog is still only 23, a young age to be tackling Liszt. The good news is that his technique is completely flawless. There are no complexities that Liszt can throw at him that he does not tackle with ease. The audio on this recording is first class, all the better to hear how he picks out the detail in the various left hand figurations. If I've one complaint, it is that the detail and precision often come at the expense of feeling. That's not really a problem in the louder passages, the toccata like opening of the Hexameron is stunning. But in some of the quieter passages he risks sounding slightly mechanical. Better that than going too far the other way, as many of his older colleagues are wont to do with Liszt, but if he were to free up his tempos just a little here and there, he would come very close to perfection in most of this repertoire.
Gavin Dixon