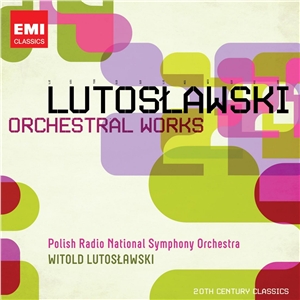 
Lutosławski's instrument was the piano, but his mastery of orchestration was second to none. The diversity of the works on these two discs is impressive, from the neoclassicism (or at least neo-Stravinsky) of the Symphonic Variations (1938), through the socialist realism of the First Symphony (1947), to the Modernist works of the late 50s and 60s, but the common thread that runs through everything is the sheer dexterity of the composer in his use of the orchestra. Even in the earlier works, where stylistic constraints keep many aspects of the music locked in a kind of mythical 19th century, the use of the orchestra is always right up to the minute. And when he starts using his 'limited aleatory' techniques in works such as Jeux Vénitiens, these too seem perfectly matched to the instrumentation, as if the loosening of synchronisation has had the effect of liberating the individual instruments.
It is this later music that is most interesting, at least to me. The Symphonic Variations, First Symphony and Concerto for Orchestra feel like a grounding in the composer's past before the real business begins, starting with the incomparable Funeral Music of 1958 and on to the Second Symphony of 1966-8, which is perhaps his greatest work. That said, the composer's most popular, or at least most performed, orchestral work, is his Concerto for Orchestra, so perhaps these earlier pieces do have an audience after all. The format of the two discs is to begin with earlier works in both cases before moving on to the later material, so if you want to know what makes Lutosławski distinctive, you'd probably be better off starting the first disc on track 6 (Funeral Music) and the second on track 4 (Jeux Vénitiens).
The performances are as good as any, which, considering how much interest there has been in Lutosławski from recording companies in the years since his death, is no mean feat. The composer leads the orchestra with a steady hand. Little of this music requires overt interpretation; the scores (even the aleatory ones) give enough detail that the composer's intentions can be followed precisely however is at the podium. Despite a certain Impressionism that informs much of the music, detail matters, and Lutosławski makes a point of bringing out the significant orchestral effects. He is fond of large percussion sections and rasping brass, but is also able to find the ideal balance between these potentially disrupting forces and the strings and woodwind.
But great as these recordings are, it is worth bearing in mind what they are not. One thing this release certainly is not is the complete orchestral music of Witold Lutosławski. Naxos are currently undertaking such a project and it has already reached Vol.7. The composer had almost 20 years of creative activity ahead of him when he conducted these sessions in 1976/77, and of the later orchestral scores, the three Chain works and the Third Symphony stand out.
Something else that this is not is new. The two discs were originally released separately in the late 70s. They were then remastered and re-released in 1994. These were then reissued as a two disc box on the EMI Double Forte label in 2000, and have now reappeared in this 20th Century Classics series. This is still the 1994 remaster, and good as it is, if you've heard these discs before, don't expect anything new from this release.
That said, the sound quality is not at all bad. EMI sent their own engineers to Poland for the sessions. They weren't recording in digital by that stage, but the results are still convincing. The worst that can be said is that the sound often seems slightly muffled and the back of the orchestra, particularly the percussion, seem strangely distant. The slightly dated sound is what distinguishes these recordings from the more high-tech ones that have appeared in recent years. From an interpretive point of view, it is nice of have the composer at the podium, but every conductor who has recorded this music since has heard these discs, and none has strayed significantly from the model presented. An important historical document then, but an enjoyable listen too.
Gavin Dixon