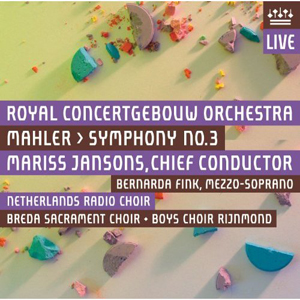 Mariss Jansons is the ideal conductor for orchestra own labels. Their tight schedules and (presumably) tight budgets mean that they need to produce something special, usually just from editing together recordings of two live concerts. But Jansons ensures that every performance he gives is to the highest standard and that the orchestra are giving everything they can. And his interpretations, while they are never radical, always include something distinctive, something that justifies yet another recording of the core repertoire works he favours.
Recordings of Mahler symphonies are hardly at a premium just now. This is the first I've heard on SACD, but it is at least the third to have been released on the format after well-received versions from Tilson Thomas and Gergiev. Fortunately, another of Jansons' great strengths is his ability to bring out pertinent details without focussing unduly on the microscopic level. That is another great bonus in the orchestra own label market, where SACD predominates, but where the improved resolution is not always exploited by conductors. Of course, working with one of the greatest orchestras in the world helps. Among the details of the score that I had not fully registered before, but that are crystal clear here, are the contra-bassoon rumblings in the quieter passages at the start of the first movement, the contrapuntal lines in the brass in the first movement's chaotic development, the interplay of the woodwind soloists in the second and third movements...
I could go on, but it is worth stressing that the detail of the sound is only one of the assets this recording boasts. More important, I think, is the sheer quality of the orchestral playing. Tuning and ensemble are close to ideal throughout, the brass playing, particularly from the horns, is a continuous joy, the strings are lush and opulent, and the woodwind solos are all distinctive. It is a shame that there is no orchestra list, because many of these players deserve to be named. I'm assuming that the trombone solos are played by Jörgen van Rijen, who makes an excellent job of maintaining the momentum of the solo line while also putting some real weight behind the sound.
What makes Jansons' reading distinctive is the rubato he introduces into the second and third movements. Many of the woodwind solos, like the oboe at the start of the second movement for example, begin with a pronounced upbeat. Jansons gets the players to lean on these upbeats, with a little more attack than you would expect and a slightly extended duration. This may seem like an affectation to some, but the consistency of the approach throughout the two movements allows it to integrate into the texture of the work. In some ways this is a Jansons trademark, and elsewhere it can occasionally be a problem. In his recent recording of Mahler's Seventh Symphony with the BRSO (BR Klassik 900101), the already fragile structural logic of that work is fatally undermined (at least in my opinion) by the liberties Jansons takes with the tempos. But he is more subtle here, and the character that his interventions adds works in sympathy with the character of the music.
This accentuated style is continued in the finale, although I don't find it quite so appropriate there. Where most conductors perform the last movement with an even, flowing legato and shape the phrases with rubato, Jansons instead keeps the tempo even and introduces some occasionally heavy accents into the string lines. It is a legitimate approach, especially as it acknowledges the sheer quantity of articulation marks in the score, but it occasionally approaches pedantry, and demonstrates why most conductors are happy to let the music flow evenly on in the gradual build-up to the final climax, which is as powerful here as in any recording.
Before all that we have the two vocal movements. Despite the precision audio, Jansons is able to maintain some mystery in the sound at the opening of "O Mensch". Bernada Fink gives a commanding performance, although her vibrato is a little heavy for my taste. The ladies choir and boys choir but put in sparkling performances, although the boys takes a few bars to get into their stride.
On balance, there is nothing here to disappoint Mariss Jansons' legions of fans. As ever, he gives a performance that is traditional yet which has some intriguing details. The orchestra are on top form, and the superior audio works to everybody's benefit. If you've liked what you've heard on any of the previous RCO Live releases with Jansons (and what's not to like), then you'll love this.
Gavin Dixon