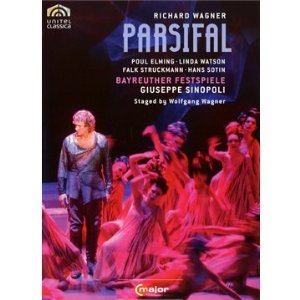 This Parsifal production is only 13 years old and yet it is already a piece of history, and an important one at that. The two most significant figures attached to the production, conductor Giuseppe Sinopoli and director Wolfgang Wagner, have both since died, and while the world of Wagner interpretation has certainly moved on, they are both giants of their era who did much to shape our perceptions of the great man's music dramas.
The downside is that everything here feels very dated. The production is one of the last forays for Wolfgang Wagner's "neo-Bayreuth" style, that viusal aesthetic where everyone wears chiffon robes in pastel shades and the scenery is all abstract and suggestive. All that was innovative in the 50s and 60s, and helped Bayreuth productions out of the rigid literalism that had held sway since Wagner himself was in charge. By the 90s it must have seemed nostalgic at best, an effort to cling on to a sense of apolitical abstraction as other houses began exploring the more unpleasant undercurrents of Wagner's works.
The abstraction has certain values. Parsifal, more than any of Wagner's other operas (with the possible exception of Tristan) is more about the music that the visuals, a balance that a lean production helps to maintain. In the first act, tall, irregular pillars in iridescent green represent the forest. When they are moved away, the stage becomes a simple shrine, with an octagonal alter at the centre surrounded by similarly shaped concentric figures in the floor. This serves the outer acts well, but is changed little for Klingsor's castle in Act 2, which is disappointingly understated.
Wolfgang encourages a naturalistic acting style from his singers. Of course, throughout much of this opera there is very little for any of them to do apart from stand and sing. But even so, Hans Sotin makes a compassionate Gurnemanz, Linda Watson a fascinatingly troubled Kundry and Poul Elming an appropriately naïve Parsifal. Their voices are all equal to Wagner's many challenges, and while the cast is equally competent in terms of the vocal performances, there are few star turns. Sotin has a good range of timbres to express Gurnemanz' various emotions, and also to keep his long narratives in Act 1 interesting. His voice lacks weight in the bottom register though, and also precision at the top. Elming has all the notes for Parsifal. He doesn't sound like a traditional heldentenor, his voice is more earthy and grounded. What his singing lacks in beauty, it makes up for in dramatic urgency. With Ekkahard Wlaschina as Klingsor, the reverse is true. His voice seems light, at least in comparison to the demands of the role. Otherwise he is fine, he just that he doesn't sound as menacing as the part requires.
Given the date, the sound quality is unexceptional, and it does none of these singers any justice. The orchestra sounds OK, although the string sound wanders disconcertingly between the two channels of the stereo mix. But everything on the stage sounds very distant, as if the only microphones were in the auditorium, and deep in the auditorium at that. The video direction, by Horant H. Hohlfeld, is appropriately conservative. There is no point in introducing distracting camera angles and editing in a piece, let alone a staging, as static as this. The three(ish) cameras are put to good use, and the restrained editing seems ideal for the staging.
Sinopoli was a controversial figure in his day, and this reading of Parsifal is likely to divide opinions as much as anything he did. Everything is very matter of fact. The Prelude, for example, starts at a slightly brisker pace than in most recordings, but then maintains that pace throughout, with little recognition of the shape of the music of the gravity of the climaxes. It is a disciplined reading, and that discipline certainly pays off in the orchestral playing, which is note perfect (if that even needs to be stated with the Bayreuth Orchestra) but is also very finely balanced. This allows for some real delicacy in much of the playing and in much of the singing.
If Sinopoli shows little interest in the dramatic shape of the individual phrases, that might be because he is saving it up for the main climaxes. Both musically and dramatically, the saving grace of this production, at least for me, is the staging of the grail rituals at the ends of the first and third acts. In both cases, a huge chorus gradually files onto the stage, and then sings magnificently, with warmth, precision and solemnity, and with every word crystal clear. Sinopoli carefully grades the ascent up to these focal points in the narrative, allowing them all the weight they need. On both occasions, the effect is crowned by the appearance of Falk Struckmann as Amfortas. He is just brilliant, the best Amfortas I have ever seen. Every moment he is projecting his burden of pain, both in his body language and in the tone of his voice. When he is on the stage, he completely steals the show. Wolfgang Wagner seems intent on keeping the staging as simple as possible so an not to detract from the singers. Struckmann more than any of his colleagues puts in a performance to repay the director's trust.
Gavin Dixon