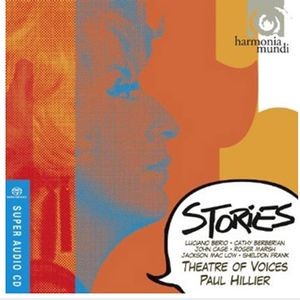 The standout work on this disc is Berio's A Ronne, an experimental yet consummate vocal ensemble piece, taking in a wide range of vocal techniques, while also exploring issues of language and meaning.
Like his earlier Laborintus 2, A Ronne was a collaboration with the poet Edoardo Sanguineti, who again provides a complex and multi-layered libretto, combining several languages and including brief quotes from a bizarre array of sources, stretching from the Gospel of John to the Communist Manifesto. One consequence of this high-brow postmodernism is that only the most culturally astute and language proficient listeners are going to get the majority of the references. There are references in the music too, but for the most part, Berio focusses his interest in the semi-verbal vocal sounds in which he frames the texts.
The programme ends with the undisputed classic of unaccompanied vocal Modernism, Cathy Berberian's Stripsody. The score for this piece takes the form of a comic strip, although the performance directions are more specific than this might suggest. For the most part, words are written on a stave, with the fonts suggesting the style of performance. If all this suggests a fight scene in Batman, that is part of the idea, and the resulting work makes explicit references to the comic strip connection. At one point the singers exclaim "Is it a bird? Is it a plane? No, it's Superman!", and there is some good Tarzan warbling at the beginning too.
Berio has maintained an impressive reputation as an independent thinker in the world of post-war avant-garde music, which is all the more impressive given the sheer number of independent thinkers of that school and the extent to which it celebrated individuality. So it is a surprise to find how much A Ronne shows the influence of Stripsody, although both works were written after their composers divorced. The Berio is a more complex piece, and perhaps a more musically successful one, but it is destined always to be overshadowed by Berberian's iconic score.
It seems unfair to say this of anything by John Cage, but the other pieces on the disc seem little more than fillers in comparison to these two great works. Cage's Story, based on a libretto, or rather two short lines, by Gertrude Stein, combines extended vocal performing techniques with the aesthetics of minimalism-by-repetition. The results lack substance in terms of interest or musical material, but in a sense that is whole idea. The work does fit into the programme, but only just, and would be better served in an all-Cage programme.
Not A Soul But Ourselves by Roger Marsh is an ambitious effort to set lines from Finnegan's Wake. The voices are amplified, enabling very quiet vocal articulations to be used in a variety of fascinating combinations. The result suggests Stockhausen's Stimmung, although that is at least in part a result of the fact that these singers have recorded both scores in recent years, both to an equally high standard. Young Turtle Asymmetries by Jackson Mac Low and As I was Saying by Sheldon Frank are more text performance works than musical compositions. As such, they also fit snugly into the programme, but without adding very much in terms of musical interest. Even so, the Sheldon Frank piece gives an excellent opportunity to hear Paul Hillier's rarely employed cockney accent.
The performances here are all first class. The Berio poses the greatest technical challenges, but all are executed with fluency and (apparent) ease. The balance and ensemble between the singers is always ideal, and the sound quality is great. Harmonia Mundi's decision to release the disc on SACD is an excellent one, and the high quality audio really shows off the detail of these works, all those tongue clicks, growls, and transient pianissimo clusters in the close harmonies.
None of the works, with the possible exception of Stripsody has any discography to speak of, making this collection especially valuable. It is probably worth mentioning that the Berio is sung in the original five voice version and not in the later eight voice arrangement. Also, Stripsody is sung by three female voices rather than the specified single voice. But then, the whole reason that this recording works is that the performers have taken a lively and playful approach to these lively and playful works. A little reinvention is always a good thing, and old as some of these scores are, everything on the recording feels bang up to date.
Gavin Dixon